Hello to ‘Over There’ 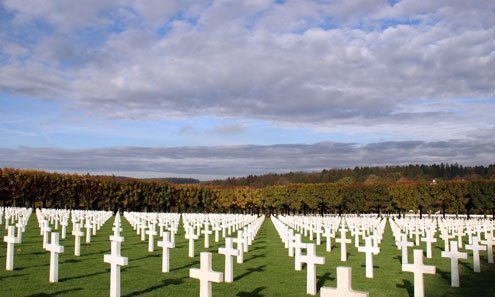 The Meuse-Argonne Cemetery contains graves of the thousands of American soldiers who died during the final World War I offensive. Photos by Madeleine Johnson.
W

orld War I is America’s forgotten war, overshadowed by World War II and remote from living memory. In early November, I set out to find it. With my dog as co-pilot, I drove from Milan to France to retrace the footsteps of my great-uncle, Lothar R. Long, who served in the U.S. Marine Corps’ 6th Machine Gun Battalion.

First stop was Nancy. After breakfast in a café where Uncle Lothar once enjoyed the miracle of a quiet beer between battles, we headed for St. Mihiel. In one village, faded German writing on a wall pointed to the “Bahnhof” (train station). Tucked behind a farmer’s woodpile was a cemetery for German soldiers. On the hill above, in a monumental graveyard, Americans lie in state under marble crosses. Toggling among modern maps, my uncle’s letters and his unit’s history, I bumped along abandoned roads to the spot where my great-uncle’s company’s had aimed machine guns on the Church of Thiaucourt below.

Then it was on to Belleau Wood. Barely 30 miles from Paris, these forestlands played host to an epic battle between German troops and U.S. Marines. It was on this terrain in June 1918 that the Marines Corps earned its stripes and Germany became aware of U.S. military toughness.

Stopping occasionally to pull rusty fragments from earth that still yields an “iron harvest” of relics, Gilles described a war of trigonometric complexity: up hills and down ravines, back and forth on roads and tracks. The age-old imperative of taking the high ground required merging a feral sense of terrain and with an intellectual grasp of the military chessboard.

After fighting at Belleau Wood, Uncle Lothar wrote that he rested in a walnut bed in an empty, painting-filled chateau whose windows overlooked a rose garden. Gilles found the chateau for me. The paintings still hang there and the beds are for guests of what is now a bed and breakfast.

We then drove north, following the Meuse-Argonne campaign towards Luxembourg and Germany. Though vast fields suggest nature’s endless power of renewal, much of the land lies eternally fallow, too poisoned by unexploded ordnance. Many local villages were too battered to rebuild. We passed highway markers — boulders emblazoned with a star — placed along the route of America’s Second Division. Driving along a hillcrest, I recognized a farm name from one of my uncle’s letters. After slip-sliding down a muddy road I found a woman in dirt-spattered boots, cigarette hanging from her lips. She worked a log splitter that sounded like artillery. A widow who lives alone, she manages a family farm that once held a line of Marine machine guns.

Cemeteries are more common than gas stations in this de-populated part of France. The German ones have crosses and Stars of David while French graves feature crosses and Muslim script for colonial troops. Bombastic monuments and groomed trench traces distinguish the American cemeteries.

Every village has a church tower and a commemorative monument. Many are pockmarked by artillery from two world wars and the 1870 Franco-Prussian war. Many hilltops are crowned with memorials to thousands killed to control it.

Birdsong has replaced gunfire and yellowing leaves soften woodland depressions that only a trained eye recognizes as shell craters or trenches. The perfect geometry of American cemeteries defies any understanding of what the war must have been like, with the constant stench of rotting flesh, the screams of wounded men and horses, and the thundering of guns. Driving through beautiful countryside or walking through lovely autumn woods can feel like a sacrilege. “War,” my great-uncle wrote in 1918, “is death on all imagination.”

On November 10, at dusk, I reached the banks of the Meuse River. Here, on the same day and at the same time in 1918, American troops began the war’s last campaign. As darkness loomed, engineers swam across the icy river pulling cables to erect a pontoon bridge. On the opposite bank, situated on higher ground, the Germans shredded them with artillery. Even the most battle-hardened troops said that was the worst of all. Some 1.2 million U.S. troops were on the move and more than 26,000 died in a three-month, war-ending campaign known as the Meuse-Argonne Offensive. The total Allied and German dead numbered an estimated 170,000.

To see the boulder commemorating the site, we drove down to the riverbank itself along a tiny, muddy road. A haze hung over the hills across the river. Shadows created by the woods — where the Germans were concentrated — cast a long shadow, as dusk blew in blasts of chilling air. Cold brown water slid by and eddies sucked in stray leaves and twigs. A hunter’s single shot echoed in the valley. Finally, imagining the crossing, I felt the ghosts.