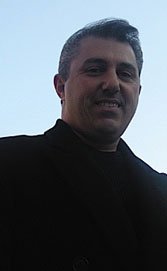 hen Rosario Rositani was a boy on holiday with his family in Naples, his mother recalls him asking why they couldn’t fly non-stop to Naples from New York City, where the family lived. She also remembers him vowing that one day he’d start an airline to do just that. Now, some 30 years later, with two decades of airline experience behind him, Rositani is making good on his pledge.

Ciao International Airways is due to take to the skies by the summer. It is marketing itself as the first low-cost transatlantic airline, as well the first to fly non-stop between New York and both Naples and Pisa. According to the company’s research, it would also be the first airline to be started by a former flight attendant.

With his American pro football build, it is hard to imagine the 42-year-old Rositani serving cold drinks and handing out hot towels to passengers on Pan American and American Airlines. But he did. “The flight attendants are the backbone of the industry,” he says. “They’re the ones who bring the money in, not the pilots…Who knows what the passenger really, really wants if not the flight attendant?”

Rositani, an enthusiastic New Yorker, is determined to give passengers their due. “As a flight attendant I’ve seen people ask the person next to them, ‘Sir, how much did you pay for your fare, I wanna know.’ Then they get furious. ‘You what! You paid only $300 I paid $800!’ It’s a disaster and we’re going to eliminate that. Everyone’s going to have one price.”

Rositani, who will lease long-haul Boeing 767-300 aircraft at the start, wants to set a standard one-way price of between €300-399 for his Italy-U.S. flights. It won’t matter whether the passenger purchases a ticket six months or six days in advance.

Though he’s backed by private investors, he is also counting on local assistance to get started. So far, the Campania region — where Naples is the capital — has pledged funds, hoping the airline will generate additional employment and tourism. Naples and Pisa airports, eager for new traffic, have also offered the airline free office space. Rositani says other smaller hubs, including Ancona, seek his business.

“I want to bring back genuine service for people, like it used to be in the 1940s and 50s,” he says. “That’s important to me.” He also wants a simple refund policy, “People work hard for their money and if they want their money back it’s their money, why shouldn’t they get it back? So if a passenger can’t fly tomorrow we’ll refund them 100 percent. If they want to fly another day we’ll give them another ticket without a fee,” he says.

Other benefits Rositani is promising are no jet fuel surcharges on fares and no charges for paper tickets.

He may be dreaming, as he readily admits, but his management CV remains impressive: drafting airline policy and guideline documents and finding financing for two small start-up carriers, public relations, marketing and consultancy work — all in the airline industry.

What drives him is a desire to become a positive force in an industry that has had little good news to offer since September 11. “If this airline is up and running and doing good for the people and we get other airlines to follow suit, and I die the next day, I know I’d be happy because I’d have fulfilled something.”

On paper, recent events in the industry don’t augur well for Rositani. Italy’s low-cost Volareweb suspended operations in November. In France, the regional carrier Air Bourbon failed the same month, leaving passengers stranded on the the Indian Ocean island of Reunion. A Swedish businessman’s bid to create Now Airlines to compete with Ryanair and EasyJet was launched but never made a flight, folding last June. Even major carriers like Delta, which flies from Rome, are ailing.

Ray Neidl, an airline analyst and author of “Airline Odyssey: The Airline Industry’s Turbulent Flight into the Future,” is skeptical about Rositani’s bid. “I don’t have a lot of faith in start-up carriers. They have to be well capitalized and have good management and a good niche,” he said. “I’m not sure if the market is ready for independent, budget international carriers. I’ve seen people try to start before and fail. There isn’t a great growth potential.”

Rositani shrugs aside such concerns. “You’ve got to eliminate [worry] from your mind, you’ve got to be optimistic,” he says — though he does admit the recent surge of underworld violence in Naples troubles him.

Neidl’s emphasis on the importance of a niche market may eventuallly work to Rositani’s advantage. Naples and Pisa each have nearby U.S. military bases, and a U.S. military stipulation that personnel and cargo can travel only on U.S. carriers could give Ciao International significant inroads into the military market. Rositani says the airline has already struck a deal with the U.S. Postal Service, which currently sends parcels through Frankfurt or Rome to get them to Italian regional destinations.

There’s also tourism. Rositani believes Pisa’s proximity to Tuscany, and Florence — destinations popular with Americans — will assure ticket sales. Naples, in turn, is close to Pompei, Herculaneum, Vesuvius and the Amalfi Coast, each one a popular tourist spot. By signing with Ciao International, cruise lines based in the Mediterranean can fly customers directly to Naples, bypassing Rome, to board vessels.

Though he has his eyes trained on the Naples and Pisa transatlantic market for now, Rositani hasn’t ruled out eventually flying to and from other Italian cities and targeting European destinations.

He says he hopes to emulate his airline industry hero, Virgin’s Richard Branson, well-known for winning staff loyalty by making himself approachable. Rositani says he’s determined to do a shift as a flight attendant once a month, to get to know his staff, make them feel valued, and have direct contact with passengers.

Only that way, he says, can he run a successful airline.