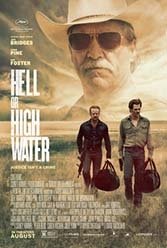 “Hell or High Water” is an engaging remake of the Western for the early 21st century. On the surface it’s a classic buddy film with two sets of buddies, bank-robbing brothers, hotheaded vs. cool-headed, and two Texas Rangers, one old and crusty, the other half-Comanche, half-Mexican. Stereotypes abound: abusive father, mother who prefers one son, acerbic divorcee, savvy waitress (nicely played by Katy Mixon), evil banker, and serial robberies.

Scottish director David Mackenzie and writer Taylor Sheridan (“Sicario”) effectively refashion these stereotypes to fit today’s culture. Though one Ranger spews non-PC language, he remains devoted to his Mexican-Native American sidekick. Robberies aside, bankers are portrayed as evildoers that peddle reverse mortgages with onerous terms. Everything about the West Texas small town setting echoes the bypassed rural America that elected Donald Trump. The townspeople don’t identify particularly with the gunmen, nor are they particularly eager to help out a government (represented by the Rangers) they consider irrelevant to their lives.

In contrast to the stylized blood and gore of Quentin Tarantino’s “The Hateful Eight,” MacKenzie’s movie gives you only two deaths and just one spurting artery. Sheridan’s script keeps the story moving by shifting between the pursued buddy robbers and pursuing buddy lawmen. Robber brothers Tanner and Toby (appealingly acted by Ben Foster and Chris Pine) are neither evil enough to warrant being killed nor heroic enough to idolize. Ranger Marcus Hamilton (three weeks from retirement) — Jeff Bridges in yet another winning role — is low-keyed in the style of Peter Falk’s “Colombo,” the bumbling yet incisive detective in the trench coat. Sidekick Alberto (Gil Birmingham) tells him: “I don’t know how you’re to survive without someone to outsmart.” Over-the-hill Hamilton, of course, possesses his own array of quips, as in “sitting on the porch, practicing my future.” This is a “talky” in the best sense.