Hell no, we won’t stay 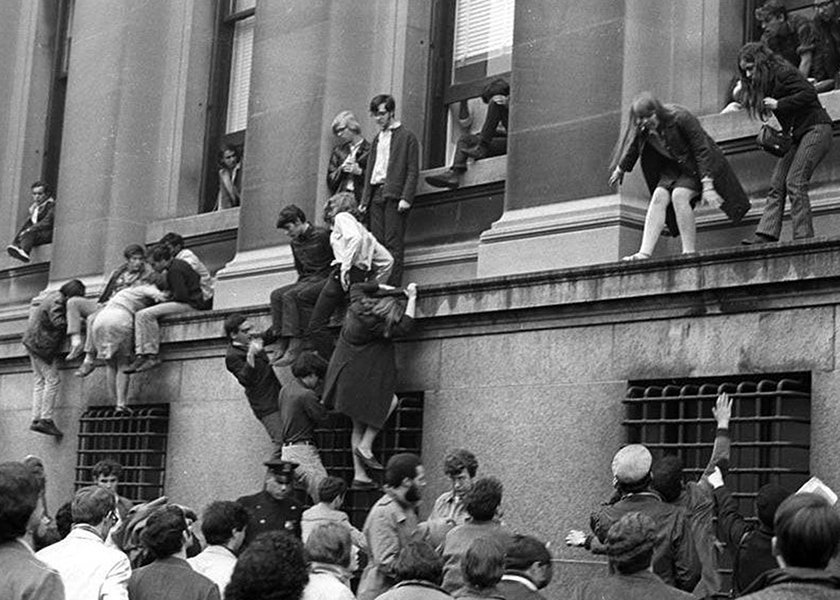 e wouldn’t have stood for it. A week maybe, tops. We had no internet. We had no cable TV news. We had no 24/7 anything. We had our youth, a college campus, a war raging in Asia that most of us opposed, skepticism about government making decisions “for the common good,” and a life ahead of us in an oil-embargo hit economy that had seen gas prices go up 300 percent in the blink of an eye. No sector qualified as robust and New York City was broke. Just Google “1973 recession” and soak in the joy. It’s hard to explain the primal components of rebellion to those who live in rebellion-less times, or times in which resistance is digital, not physical.

Had we been told a virus had come to town and we had to stay put in our New York City dorms, we might have complied for that one week, all the time wary that someone could be lying to us about what was really happening.

But to be asked to witness the shutdown of our college, of all colleges, of a dirty, broke but vibrant city, of the whole state; to be asked to watch and approve, no, sorry, we wouldn’t have done that.

We would have taken to the streets, because the streets belonged to us, not plague merchants.

Even the less radical among us would have joined in some protest by some campus anti-imperialist league, taking to the streets and demanding that our civil right to congregate, to walk freely, to go to the movies, to go to school, to not be impeded by police or army men hardly aware of the “why” of their mission. We’ll take our chances, we would have said.

Sickness or not, we would have taken to the streets, because the streets belonged to us, not plague merchants.

What else could we have done — absent the web wormhole that now acts as the planet’s collective escape hatch and gripe-haven, albeit one that’s located in the semi-privacy of your own home or those of friends. We wouldn’t have had phones to text with or to send selfies or Instagram missives of us on empty streets, captioned, “New York! Can you believe it?!”

Politics was in our blood. A president was under investigation for hushing up a break-in, and that Asia war had already cost some 50,000 dead men, all of which we’d see highlighted on news shows that lasted 20 minutes and not 20 hours.

Immortal, we would have migrated wherever we could, shouting, “No Corona for us!” or “Stop locking us up!” or “No jail without charges!” We might have called ourselves the Immune Crew, and heckled scientists who told us we were putting others at risk by telling them the sooner we got sick and healed the sooner we’d prove the lockdown a fascist trick, a pretext, a method.

We would not of course have been immune, and some of us would have gotten sick, but we were 18, 20, or 22, and for most of us it would have passed fast enough to expose the sham. It was a sickness, sure, there were lots of them in the world, but its real target wasn’t us but an over-the-hill establishment already sick with complicity in too many racial, social, and political hypocrisies to name.

We, and not a state or a government, might have shut down the university, but not because of a pandemic (what the hell kind of word was that?), but the way the pandemic was being astutely manipulated to lay siege to our restlessness.

The sooner we got sick and healed the sooner we’d prove the lockdown a fascist trick.

I do not write this with pride, rancor, or righteousness, or even a firm belief that our actions would have been wise, but to say that many of us would not have accepted or complied with what’s now the kowtowed-to norm. We have told our oppressors to stop killing the working class by starving it of work. Not because we had jobs but because we secretly wanted to make headway in society, at least eventually, and get salaries that came with the climb up the middle class ladder. We wanted, at least the boys among us, to make girls admire our courage, and unlike today there was no courage in following the rules.

In our messy dorm rooms amid vinyl LPs by The Grateful Dead, The Who, The Rolling Stones, Jethro Tull, our ashtrays swollen with butts and old joints, our beds unmade, we of the Immune Crew would have read the latest headline about the latest lockdown “detention” and made a pact to gather outside some locked park and begin to march until the cops arrested us.

Into the pandemic storm we would have gone, cool fools or, perhaps, furious fools, but at least not lackeys shut in for our own safety.

That is how I imagine the web-less, CNN-less, social media-less once upon a time, unsullied by too much information and not yet living and breathing the endless calculus of anxiety that now thwarts anyone from doing anything against the grain.

I know, you may not believe it. But we lived in a world where anything was possible if you wanted to make a mark, with no Youtube channels to warn you otherwise.

We would not have stood for it, but we’re long gone.