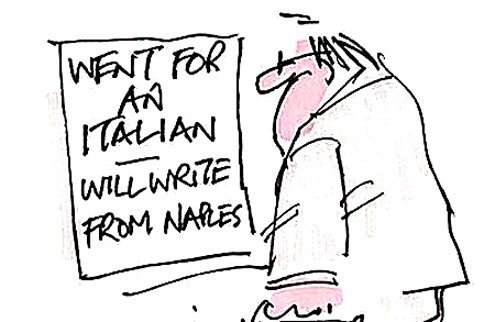 I watched his body become a tiny speck at the end of a long boulevard in the darkness of night.
T

his month’s topic is “weirdest dates.” I asked my friends to tell me about their weirdest dates, but apparently they’ve never had any weird dates. Luckily, I have.

Danilo had intense eyes and an odd little patch of white hair set against neatly trimmed brown hair. He had called several times to invite me to dinner in Milan and I eventually conceded to a date. We agreed to meet at the Cadorna Metro exit after work. He was dressed smartly and flashed a smile with his eyes when I emerged from the Metro station.

“I know of a good restaurant I’d like to take you to and I have my car parked not far from here,” said my date, who said he was a professional chef.

Always enticed by the prospect of a good restaurant in the company of a professional chef, I set off with him in the direction of his car. We walked down a long tree-lined boulevard and started up another. The lights and noise of the Metro piazza faded into the distance and before long our conversation was the only noise heard. He was from Basilicata and told me that the region was named after the word “basilica” because it has so many churches.

My initial concern, pending the growingly disproportionate walking distance versus improper footwear ratio I was experiencing, was keeping pace with him. “Not long to the car now,” he said, flashing another one of those ocular grins. But soon, a secondary concern snuck up on me: Why would Danilo leave his car so far away when — come to think of it — this dark, deserted street is nothing but one empty parking lot….

“You Americans killed all the Indians,” he suddenly blurted out after a long, eerie silence.

“Excuse me, what did you say?” I asked, wondering what he had just said.

He repeated his words between tightly clenched teeth: “You killed all the Indians.” I could hear shards of calcium shredding off his back molars. He did that eye-flash thing again.

“You know what? I had a really humongous lunch today,” I said, heading back in the direction of Piazza Cadorna.

He followed quietly at my side. Once at the square, he asked if he could accompany me home.

He then asked if he could call again.

He politely said good night and then did the strangest thing: He ran away. I mean he ran, as in sprinted á la “Chariots of Fire.” I watched his body become a tiny speck at the end of a long boulevard in the darkness of night. And, no, he did not run in the direction his car was allegedly parked.

I also met Michele in Milan. He called to ask me for drinks and a movie. Although I didn’t know much about him, I did know he was smart, good-looking, socially-conscious, politically-aware and a good conversationalist. I agreed to the date.

After the movie, we found a friendly little bar for drinks and got comfortable on the cushiony chairs so that we could get to know each other better. He told me he worked for non-profit organizations and did stints at a number of U.N. missions.

(That’s funny I thought: My ex-boyfriend, Marco-may-one-thousand-worms-penetrate-his-nostrils, also worked for the UN.)

Michele had been posted in places spanning the globe including Cuba and Africa. He always returned to his native Milan to unwind for a few months and then looked forward to signing on with the next mission. A few days prior, he had returned from Kosovo.

(That’s funny I thought: My ex-boyfriend, Marco-may-he-suddenly-lose-his-eyebrows, worked in Kosovo at the time.)

Michele told me about the various missions he had been involved in and described some of the programs he had helped start. There were schooling programs for children, job training for the unemployed and he had been instrumental in drafting legislative measures for self-government from his office in Pristina.

(That’s funny I thought: My ex-boyfriend, Marco-may-his-limbs-be-subject-to-gangrene, lived in Pristina at the time.)

Michele detailed his immense job satisfaction and outlined the places he’d like to go one day and the people he’d like to help. He then reclined, took a long sip from his beer and said: “Now let’s hear about you.”

I could muster up but one thing to say:

“Did you know a guy named Marco?”

“Marco, of course! What a great person and a good friend of mine,” beamed Michele enthusiastically. “Although I must say, poor guy, was recently having a hard time with some horrible ex-girlfriend of his.”