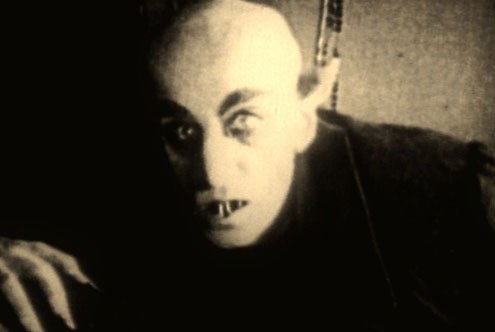 ax Schreck’s lustful Count Orlok is revulsion for the ages. Hundreds of horror films have vainly mimicked his gaunt menace. His rodent-fanged face devoid of human traits established a yardstick for the on-screen monstrous.

German director F.W. Murnau’s 1922 silent classic “Nosferatu” was the first Bram Stoker knockoff to make it to film, and in many respects still the most terrifying. Unmarred by verbal static, Schreck’s metamorphosis is simple and shocking.

The plot: When recluse Orlok expresses a desire for a new home, his agent (Knock) dispatches young estate agent Hutter from Bremen to the count’s outland castle. In relentless semi-darkness, Hutter and wife Greta are gradually drawn into Orlok’s netherworld.

Some say Orlok’s horrifying aspect — seen only briefly — was Murnau’s response to World War I photographs of mustard gas disfigurement. Others insist occultist and Prana co-owner Albin Grau merged his own war experiences with a longstanding penchant for all things morbid. Whatever his genesis, Count Orlok leaves a haunting impression.

If a haunting can claim an interplanetary dimension, memory lane’s hall of fame should also include Alex Proyas’ overlooked “Dark City” (1998), a sinister piece of science fiction that trips the genres fantastic. Out to make a noir, Aussie Proyas took a left turn in space, setting his story on a sunlight-deprived urban asteroid slippery with girders and run by men and boys who wear G-men hats and are known as the “Strangers.”

A rasping doctor awakens John Murdoch (Rufus Sewell) and tells him to flee what looks like a murder scene. Not knowing if he committed the crime, Murdoch scampers off into what looks like a surreal version of 1920s Chicago. On the run, he’s haunted by memories of a woman, Emma (Jennifer Connelly). Is she his wife or a singer? And why does he remember a place called Shell Beach?

Proyas siphons energy from Murdoch’s survival instincts and romantic motivation from Emma. But the strength of the story is dislocation: does murder matter in a place that may not be real? Does a nightmare end with morning? Who or what is asleep, the dreamer or the world itself?

If Proyas has a mind of his own, Mexican Alfonso Cuarón, in “Children of Men” (2006), uses a P.D. James novel to mine a future imagined as infertile. Cuarón — who over the years has moved from “Y tu mamá también” to “Gravity” — loves letting cameras, music and imagery take the lead (here, kitschy homage to King Crimson, Pink Floyd, and Picasso nearly derail him into a retro concept-video).

It’s the year 2027 and the oldest person on the barren planet has died, age 18. Enter poker-faced bureaucrat Theodore Faron (Clive Owen), a lost soul in a London that looks like a cross between Shanghai and Tirana (“Britain Soldiers On,” say TV adverts, showing conflagration elsewhere). It’s a world where Big Brother promotes a suicide drug called “Quietus.”

But Faron is kidnapped by ex-companion Julian (Julianne Moore), who heads a pro-life terrorist group named the Fishes (read your Bible) which have miraculously pregnant African woman Kee (Claire Hope-Ashity) in their keep. The Fishes want Faron’s help to get the woman to coast and into the custody of something called the Human Project.

No such safety exists in racist Britain, where beleaguered immigrants are reported, arrested, and caged. Cuarón manipulates the post-9/11 ethos into imagined Anglo horrors that pull together ingredients of assorted historical genocides. When Faron agrees to help the Fishes and Kee for cash, Cuarón shifts into overdrive. Julian is gunned down. So is Faron’s sympathetic hippy friend Jasper (the sly Micheal Caine). Suddenly, he’s on the lam with pregnant Kee in tow.

This jerky but visually poised fantasy (with comic one-liners) is a fable about the mixed blessings of a species jointly addicted to conflict and renewal. Troops storming an immigrant concentration camp are hypnotized into a brief High Mass-like cease-fire when they see Kee’s newborn girl, only to swiftly resume their Sarajevo-styled bestiality. But it is Cuarón’s gypsy-like transcendentalism – mysticism feeding grace, and vice versa — that distinguishes this film from comparable efforts, including Terry Gilliam’s wild-ride “Brazil” and Danny Boyle’s bleak “28 Days Later.” If “Gravity” is much about the dimensions of space, this is all about the foibles of people.