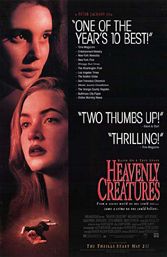 New Zealander Peter Jackson had only B-grade horror on his résumé (check out “Bad Taste” and “Braindead”) when he embarked on this bit of bravura. In prudish 1950s Christchurch, New Zealand, private school teens Pauline Parker (Melanie Lynskey) and Juliet Hume (Kate Winslet, in her first feature role) grow obsessively close after the primping Hume enters the local school from England. Self-styled outcasts, they devotedly occupy one another’s time by hero-worshipping Mario Lanza, Orson Welles (“frightfully romantic”), and populating an imaginary realm called Borovnia (where priests and shrinks are disemboweled).

When Pauline’s worried mother Honorah decides to bust up the friendship, the girls devise a plot to kill her. Jackson smartly lets meek Pauline fall in love with know-it-all Juliet in full view. The consequences — a female take on the banality of evil — aren’t meaningful until the murder itself wakes the girls from the conceits of sovereign conspiracy. Jackson works counterclockwise, opening with the murder and then laying its foundation. The original case, which Jackson uses as a sketch, occurred in 1952, and Juliet is actually British crime author Anne Perry.