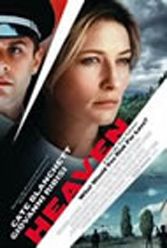 Early gaffes nearly derail the movie. Italy has that bad comic book feel; carabineri Filippo (Giovanni Ribisi) speaks in a kind of Spaghetti Western vernacular. But stick with the plot and you get some stirring work. Cate Blanchett is suspected of her husband’s murder (an office bombing) and is on the run from Turin police. Cop Filippo falls in love with her. Director Tom Tkywer (“Run Lola Run”) peels off the layers of his characters and moves the story into the Tuscan countryside. This is a mesmerizing Italian road movie made by a German from a script from two Poles (including “Three Colors” Krzysztof Kieslowski) and including one of the best British actresses of her generation. It’s about the elusiveness of redemption, how trust ebbs and flows, and the way truth and love affect loyalty. The climax, which picks up and solves the movie’s opening strands, is among the better scenes in recent film.