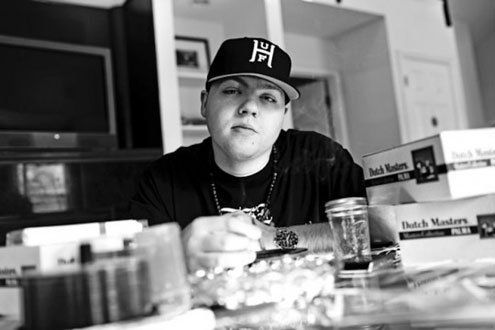 DJ Burn One smolders on "The Ashtray" (self-released)
O

ppressive summers can put a cold glass of water ahead of the play button, but some albums just beat the heat. DJ Burn One’s first full-length solo effort — The Ashtray (self-released) — is a good example. Burn made a name for himself backing some of rap’s better new generation leaders. Yelawolf’s Trunk Muzik, Pill’s 4180: The Prescription, and Freddie Gibbs on “Do Wrong” all have Burn’s touch to thank (and they’re not alone).

On The Ashtray, the Atlanta producer can claim all the credit for himself. Entirely instrumental and smoldering, The Ashtray weds hi-hat-obsessed crunk to after-hours guitar solo schmaltz, an unlikely union. The 15-track free download buzzes as much as it strolls, bounces as much as it tumbles, burns as much as it liquefies.

“The Day The King Was Crowned” is among the better examples, its dripping guitar lick sounding straight out of a Phish jam. The solo is a desert mirage from the Holy Mountain catalog, with skipping synths, a throttling low end, and the expected clap on the beat. The clash is counterintuitive but the results compelling.

Nobody’s jumped on these tracks yet, but some kid will, spitting its verses through Vegas or Audacity and uploading it to Mediafire. Maybe that kid will be the next Yelawolf or Pill or Freddie Gibbs. If so, he’ll have DJ Burn One to thank.

Another heat-beating alternative comes from a band that’s best enjoyed blaring from a jukebox. It’s been 18 years since Dallas quartet Old 97’s first came together, but their recent run of albums has them sounding fresher than ever.

The latest is The Grand Theatre Vol. 2 (New West), a continuation of last year’s first volume. “We delved further into our experiments in gritty garage rock and at times spun further into lush psychedelia,” says frontman Rhett Miller. “Like Vol. 1, you’ll find narratives that are stunted and strange.”

That makes sense, since the first Grand Theatre was intended as a double album. What’s invigorating about Vol. 2 is the way Old 97’s effortlessly sweats out jaded bar band hits. These guys — most over 40 — sound half their age. “Brown Haired Daughter” immediately gets things into head-nodding territory and after that the mid-tempo rollick rarely lifts.

Ken Bethea’s deft guitar tones aren’t always highlighted, but the band knows when to move it around, with Texas producer (and new addition) Salim Nourallah keeping it interesting.

Interesting describes Seattle’s Shabazz Palaces. Listening to Black Up (Sub Pop) with a tired ear or in the background gives the impression it might fit into a summer jam playlist.

It’s not that simple. This record has worked up a media storm for its inscrutability, its sonic shape-shifting, and its downright difficulty. Former Digable Planets member Ishmael Butler hasn’t helped resolve the loose ends, refusing interviews and keeping a low profile after years spent in the Northwestern wilderness.

Following two challenging self-released EPs in 2009, he christens the Shabazz Palaces moniker in fine style with a hip-hop record likely to appeal as much to fans of the classics as forward-thinking futurists. Pigeonholing it is pointless.

Butler’s flow combines West Coast smoothness and occasionally unexpected agility with avant-rap free associative formations and poetic digressions. Song titles (“free press and curl,” “Youlogy,” “Recollections of the wraith”) adhere to no strict standards of grammar or form. The production mines everything from boom-bap to dub to glitched-out IDM.

What more could you ask for from an album? If it’s not the best hip-hop record of the year, I don’t know what is. Then again, maybe I could use a cold glass of water.