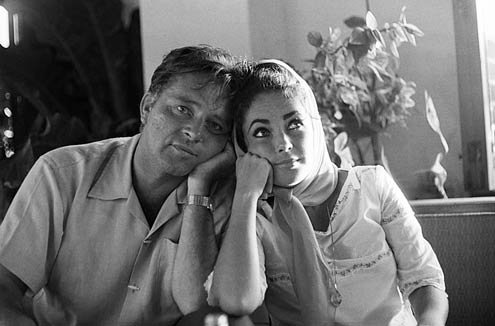 Burton and Taylor as photographed by Time Magazine
F

rom those first moments in Rome we were always madly and powerfully in love. — Elizabeth Taylor, 1932-2011. A man who comes through that ordeal of fire in Rome must emerge a different or a better man. — Richard Burton, 1925-1984.

In 1961 when award-winning director Joseph Mankiewicz moved the calamitous 20th Century Fox production “Cleopatra” from Pinewood Studios in England to Cinecittà in Rome and plunked down $250,000 to buy the Welsh actor Richard Burton out of his “Camelot” contract on Broadway to play a drunk, go-go tunic wearing Marc Antony to Elizabeth Taylor’s Crayola-eyed Egyptian queen, no one could have guessed that the film, already fraught by a runaway budget and a domino effect of delays owing to foul English weather and Taylor’s fragile health, would ignite the most decadent and lambasted romance the world had ever seen.

A decade before Liz and Dick’s torrid affair exploded all over Rome, the actors had a quick, thorny run-in at the house of actors Stewart Granger and Jean Simmons in Bel Air, California. Taylor, 20-year-old Hollywood royalty two years into her second marriage to English actor Michael Wilding, had spurned the advances of Burton, a Shakespearean actor poised to inherit the lofty reigns of John Gielgud. It was Burton’s first year in Hollywood and the 26-year-old was building a steady reputation as an affable and randy raconteur and womanizer, the latter talent much to the chagrin of his wife Sybil. Taylor had no interest in becoming, as she put it, “another notch on his gun belt.”

But fate begged to differ. Ten years later, in January 1962, while filming on “Cleopatra’s” gargantuan Cinecittà set, Burton as Antony and Taylor as Cleopatra shared their first onscreen kiss, locking lips well after Mankiewicz, feeling like an intruder on his own set, repeatedly cried “Cut!”

If Taylor and Burton were concerned about concealing their new infidelity from Sybil and Eddie Fisher, Taylor’s fourth husband, hitting Rome’s Via Veneto was hardly a surreptitious move.

In 1962 the posh, serpentine avenue atop the Quirinal Hill was a celebrity-studded playground swarming with intrusive photographers whom two years earlier Federico Fellini’s “La Dolce Vita” had introduced into zeitgeist as paparazzi. After a long March day shooting Cleopatra’s zany, bacchanalian banquet scene, Taylor, donning a matching leopard coat and hat, and Burton were snapped for the first time in public on the Veneto. Le scandale, as the mellifluous-tongued Burton coined it, was born.

Transgressions far worse than Taylor and Burton’s are de rigueur for celebrities today, but in an era when stars’ images were heavily sanitized by the studios, Liz and Dick’s brand of infamy was a trailblazing moral shock.

Two weeks after the Via Veneto photos appeared, the powerful Vatican weekly L’Osservatore della Domenica published a scathing 500-word open letter to Taylor, whose third husband, Michael Todd, had been killed in a plane crash. “Even considering the [husband] that was finished by a natural solution there remain three husbands buried with no other motive than a greater love that killed the one before,” read the condemnation, before warning the future Mrs. Richard Burton of “an erotic vagrancy … without end or without a safe port.” In the United States, Georgia congresswoman Iris Blitch picked up the Vatican’s torch, calling for the attorney general to bar the adulterers from returning to the U.S. “on grounds of undesirability.”

Burton’s wife Sybil left Rome for London. Fisher went back to America where he began kicking off his nightclub act with the song “Arrivederci Roma.”

With their spouses out of the picture, Liz and Dick hid their affair in plain sight, their extravagance and debauchery a perfect match for Italy’s baroque capital.

Burton spent more than a few nights at Taylor’s opulent 14-room Villa Papa on Via Appia Antica and dropped over $100,000 at Bulgari on Via dei Condotti for Taylor’s legendary emerald-and-diamond Grand Duchess Vladimir necklace. The pair rendezvoused at the Grand Hotel (now the St. Regis Grand), dined at Taverna Flavia just off Via Venti Settembre (a back dining room is still dedicated to Taylor today) and at Tre Scalini on the Piazza Navona. Paparazzi always laid in wait. Over Easter weekend they attempted a romantic getaway to Porto Santo Stefano, but paparazzi again sniffed the lovers out.

In mid-June “Cleopatra” invaded the island of Ischia in the Gulf of Naples to film the Battle of Actium scenes. Taylor and Burton were whisked in by helicopter and checked into luxury suites at the sumptuous Regina Isabella seaside resort. Celebrity photographer Bert Stern joined them to document Taylor basking in the Mediterranean sun, but it was paparazzo Marcello Geppetti who snapped the infamous Ischia money shot: An allongée, swimsuit-clad Taylor with Burton kissing away at her neck on the stark white deck of a yacht.

“Cleopatra” wrapped filming in Italy in July, exceeding its original $2 million budget and nearly bankrupting 20th Century Fox with an astronomical $44 million price tag — the equivalent of more than $300 million today. The movie was the first of 11 that Taylor and Burton, who would famously go on to marry twice and divorce twice, made together.

Of these, two more were shot in Rome. In 1968 the couple was picked over Sophia Loren and Marcello Mastroianni to star in Franco Zeffirelli’s raucous Shakespearean extravaganza “The Taming of the Shrew,” filmed at Dino De Laurentiis studios, and they returned again in 1973 to film their final cinematic dalliance together, “Divorce His, Divorce Hers.” Rome is gorgeous in this made-for-TV movie that chronicles a couple’s divorce after 18 years from his-and-hers perspectives, but unfortunately for the bickering Burtons it seems a parody foreshadowing their tragic duo of alcohol-and ego-fueled divorces.