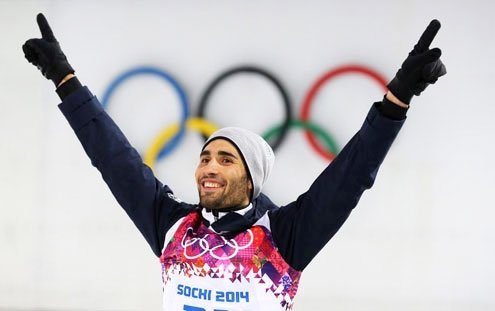 ’ve never followed sports, nor have I ever played them. I live in Italy, the football capital of the world, yet the only reaction “game day” elicits is a deep exasperation when the relative quiet of my neighborhood is interrupted by a victorious symphony of car horns and chants.

The Super Bowl was only ever exciting because of my mother’s bean dip, limited to a once-a-year treat because it was so ghastly caloric. I studied classical ballet for a full decade, throwing a fit when my parents revealed they had signed me up for beginner soccer, ages six-to-eight. Gym classes were spent as far out into the outfield as possible where I gathered dandelions.

The exception to my indifference towards sports, however, is the Olympics. Every two years, summer and winter (for as far back as I can recall), I find myself cheering on people I have never met and will never meet, regardless of nationality, event, or season. I’ve reveled in cross-country skiing, cheered on curling, and breathlessly watched swimming relays. I remember the Magnificent Seven of the Atlanta Games, eyes wide when Kerri Strug landed on one foot after dramatically injuring her ankle. Their Olympic success led to a brief stint at my local gymnastics center, where I learned how to do a proper cartwheel and delighted in flinging myself into the spongy yellow foam pit.

In 2006 my father brought my sister and me to Turin for the Winter Games. We stayed at a cousin’s apartment in the center of the city and filled our week with a bevy of sports that I typically had little interest in. Suddenly, I was patriotic, my face in my hands as I stomped my feet for a U.S.A. win against Slovenia. I teared up at the ethereal beauty of the ski-jump, the athletes gliding through the air like graceful, goggled birds. We learned that bobsledding was not much of a spectator sport — the athletes zoomed past us in a blur of silver, and we instead relocated to a pizzeria to watch the footage on television. On our last day we attended the speed skating finals and sat in front of the family of American skater Joey Cheek, who was competing. I don’t remember what we talked about, but I do remember him winning a gold medal, and the blur of orange that was the Dutch fan section of the arena.

During the Athens games I developed an intense interest in swimming, specifically Michael Phelps, and planned those two weeks of summer around the events he’d swim in, my heart racing for a stranger who had no knowledge of my existence. Two years ago I briefly became an expert in the point system used in gymnastics and I angrily declared the judges incompetent when McKayla Maroney’s vault score fell below perfect. And recently, with the Sochi Olympics, I’ve found myself a bit of a recluse, eyes fixed on the live stream of slalom skiing, snowboarding, and biathlons. “Let’s stay in tonight,” I beg my sister. “Ice dancing is on!”

So why the Olympic fervor, the sports fanaticism, I ask myself? Part of the answer is that it’s not just the triumphs I cheer for. I watch to sympathize with those who don’t cross the finish line first, the athletes who slip or fall, the human drama of it. Patriotism doesn’t play that much of a role, either. When French biathlete Martin Fourcade won his gold earlier this week, I found myself applauding boisterously (I have never been to France). I think it’s my way of marveling at those who have been fortunate enough to discover a gift, a talent, and have found the determination to hone it. Prodigies like them, I decide, are a bit of a perfect storm. What if Michelle Kwan had never been brought to a skating rink? What if Shaun White had been raised in the flat terrain of Louisiana without a hill or mountain in sight to snowboard?

When I was in my teens I wondered if I might have some sort of unknown talent embedded in me, a hidden gift I had no knowledge of, a prodigy never to be discovered. It makes me reflect on those who have potential to be great at something, a sport or an instrument or an art, but never had the ways or means to find out. Sometimes the stars don’t align. Maybe I could’ve been a great skier, or if I had just gone to that first practice my parents had suggested, a soccer player.

This could be true, but probably isn’t. I sit on my couch with my regular body having a regular supper as I watch a slew of figure skaters, all white teeth and sparkles. Their years of sacrifice and training and endurance are things I’ll never understand. I take it all in, the tears and jumping and spinning of the competitors, knowing I won’t see them for another four years. And wondering.