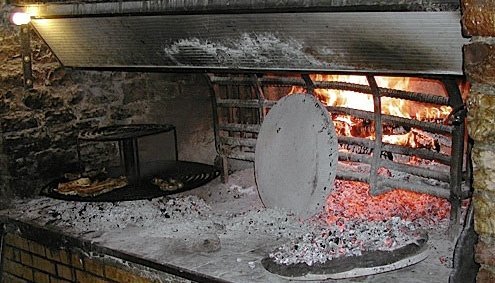 Phone ahead to ensure the fire's burning.
T

he Anglo-Saxon wish to relax and dine by a fireplace often gets short shrift in winter Italy. Even finding candlelit tables can be a challenge. Some establishments have elegant fireplaces but never toss in logs. Avoidance can serve a purpose: to protect valuable frescoes, fragile silks or paintings. But more often than not you can chalk up a dead fireplace to inertia or a lack of tradition.

For those who like hearthside dinners, here’s my personal road map. Remember always to phone ahead and tell the manager you want the fireplace stoked and burning well ahead of your arrival. Even “reliable” places forgo ignition when reservations are few. Booking an early dinner may also improve your chances of sitting closer to the hearth.

Some of my recommended lodgings — they’re listed on the coming pages — offer a fireplace either in the lobby or in a guest room (again phone ahead). Expect a price break, too. Most are not winter resorts and February is low season.

I’ve intentionally picked places off the tourist track, but all are reachable by car or train from major cities.

Some little-known destinations, such as Brescia, made the list not only for their fireplaces but for winter events and general ambience.

That brings me to Umbria: Why am I nuts about it?

First, it’s a short hop for Rome residents and generally offers high quality at prices that are easier on the pocketbook than its glam neighbor, Tuscany (Assisi, with mediocre food and accommodations, is the exception). The Umbrian diet is another draw. It is hearty, filled with game and wild fowl. Add truffles, wild mushrooms, some robust red wine, and your savory winter night is complete.

Though Brescia caters mostly to the business traveler set, the city also has extraordinary collections of art and fine Roman ruins. An exceptional Van Gogh and Gauguin exhibit, with 60 stunning paintings by Millet in adjacent rooms, runs through the winter. Relatively flat, the city welcomes bike lovers. The lake effect keeps temperatures on the mild side.

Your date with a fireplace comes at La Sosta. Its 17th-century hearth is big enough to step into. The ground floor originally housed stables where noble visitors had their horse provisions replenished, hence “La Sosta.” Upstairs, a blacksmith forged horseshoes and other accessories. Lovely vaulted ceilings and arches predominate. Check out the handcrafted iron chandeliers and the whimsical coat stand.

As for the food, begin with golden bubbles: Berlucchi’s Cuvée Imperiale Vintage 1999, the prestigious local sparkling wine made like champagne. Move on to homemade linguine, slightly creamy from broth mixed with Parmesan cheese and prized, freshly-grated white truffle from Alba. The roast lamb comes with polenta made from four kinds of grain — including the local saracena — that give it a delicate nutty taste.

Go for the local red, Ca’ del Bosco Curtefranca 2001 D.O.C., made in nearby Erbusco. A tray of hazelnut meringue cookies, biscotti, toasted nuts, candied orange peel and other treats arrived to “stave us off” until dessert: vanilla ice cream surrounded by caramelized fresh berries in sauce. Coffee and grappa by the fireplace, anyone?

Merano gives you an Alice-through-the-Looking-Glass experience. The orderly northern city is linguistically topsy-turvy. Some Italians speak only German, nordic types speak only Italian, others speak only English.

The Vilnius resort, 1,500 meters up (a chairlift gets you there), is Zen-to-order. Neutral-tone decor enhances the local wood and stone (a luminous quartz) and merges you with nature. By day, revel in the beauty of the mountains. You can soak indoors in the spring-water pool while peering at the slopes. By night, cuddle up to the fireplace at Ristorante 1500. The international cuisine reflects Italian, French and other influences. A pub called Ida offers local cuisine with a light Austrian flavor. Merano is both beer and wine territory, so each gets its due.

The Via Appia Antica attracts for its bucolic setting and Roman treasures, including the tomb of Cecilia Metella and early Christian churches. But a Sunday morning stroll or bike ride on the Appia is even more pleasant to ponder knowing that your lunch destination has three rooms with fireplaces.

Ristorante L’Archeologia takes the chill out of the catacomb tour (nearby San Callisto or San Sebastiano offer tours in English). Dinner hints at the illicit. An arch with velvet drapes is drawn to reveal a secluded room with a fireplace and round table. The catch is the surcharge. How much? “Depends on the night…” says the owner. Expect as much as €100, but always negotiate. Warning: Floral arrangements are fine, but ask them to remove lilies that overpower the aroma of the food and wine. There’s adequate and reasonably-priced Roman fare. Dark red walls, framed by stone architectural details, are alluring, as are the stairs to the wine cellar.

Bevagna offers an enchanting main square with an array of Roman mosaics. The hotels and restaurants are delightful, the mood friendly. Bike outings are a good choice since the town is fairly flat. A basin fed by river water near one of the town gates sometimes brings out local washerwomen, a window into a bygone Italy.

Fireplace dining is at the local inn, L’Orto degli Angeli, where the hearth dates from the 16th century. The hotel décor displays fine local textiles. Two salons have fireplaces and six of the 14 guestrooms also have hearths. Call well in advance to ensure you get one. “Tell us when you’re arriving and we’ll have a fire going in your room!” gracious owner Tiziana exclaims.

Giano dell’Umbria, between Todi and Assisi, is named for Janus, the Roman god of beginnings and endings (hence “January”). There’s the “bridge of the devil” outside the improbably named town of Bastardo, which is nearby, and a villa imperiale in Toccioli (currently being excavated). The local olive oil mills usually operate only through mid-December, but the luscious olio novello remains on the winter market.

The charming Il Rifugio San Gaspare, located near the top of Monte Martani, started out as an animal shelter. The hearth fire is also used for grilling meat (homemade sausage, pork, lamb, beef, and game). The atmosphere is convivial and unpretentious.

Mayor Paolo Morbindoni recommends torta al testo, a homemade flat bread made on a testo (slab) of stone in the fireplace and served with salami, cheese, or wild greens — all local. Bruschette with tartufo smells seductive (also with cooked greens or lamb coratella.) Truffles are available on strangozzi, gnocchi or tagliatelle. Mushroom lovers can try them topped with funghi porcini. Dessert includes la rocciata, apple strudel with a pine nut twist from the days when the area was ruled by Germanic lords. There’s divine crema catalana that does not come from a packet.

Though Il Rifugio is rustic and cozy, locals dress up for special occasions.

Make time for a weekend here, if for no other reason than the lovely Villa Zuccari. This small villa in the heart of Sagrantino wine country underwent a thorough renovation and opened last year. The attractive living room boasts a grand fireplace ideal for R&R after a day of walking in the chill wind.

Signora Daniela knows how to pamper her guests. Villa Zuccari serves only dinner, but it’s prepared by a local chef who picks her own wild greens and makes traditional Umbrian food.

In its heyday, this spa town hosted director Federico Fellini in the summer. He took in the baths (terme) to recover from filming. Though winter is very much off season, that can be a plus in Tuscany.

Al Casale restaurant attracts a sophisticated, well-dressed local clientele. A casale is a country house and this one has a large stone fireplace that makes for romantic winter dining. Prices are reasonable. Try the pici, a local pasta served with ragù of anatra (duck in tomato sauce). The tagliata (local beef) is a tender and tasty choice, accompanied by roast potatoes and fresh greens. There are locally-baked cakes for dessert and live jazz on Friday and Saturday nights.

How to get there: By train: Less than an hour from Milan, six from Rome. By car: Take the A4 or A21 and exit at Brescia Centro. By air: Ryanair flies between Rome Ciampino and Brescia-Montichiari airport.

How to get there: Appia Antica is a well-marked consular road leading into Rome. Fireside dining: Ristorante L’Archeologia, Via Appia Antica, 139. Tel.06.788.0494. Closed Tuesday. The restaurant is located near the tomb of Cecilia Metella. Valet parking optional.

How to get there: By car: Autostrada to Orte. SS 75 to Bastardo, then Montefalco. Fireside dining and lodging: Villa Zuccari, San Luca di Montefalco. Tel. 0742.399.402

What to see: Frescoes by Benozzo Gozzoli and Perugino in San Francesco complex. Strada del Sagrantino for wine display and winery visits. Outdoor market some mornings.

How to get there: By train: Foligno station, then bus or taxi. By car: Take A1 and exit at Orte. Signs to Massa Martana through Bastardo to Bevagna. Fireside dining and lodging: Formal dining at L’Orto degli Angeli, Via Dante Alighieri, 1. Tel. 0742.360.130. Enoteca Piazza Onofri is more casual with a fireplace in back and an extensive selection of local Sagrantino wine. Piazza Onofri, 2. Tel. 0742.361.926.

How to get there: By Car: Take A1 exit at Chiusi to Chianciano Terme. Fireside dining and lodging: Al Casale, Via delle Cavine e Valli, 36. Tel. 05.786.0501, has three rooms upstairs. It’s about a kilometer from the terme, or thermal baths. Rates are negotiable on weekdays or off-season. Hotels in town are inexpensive but lackluster.

How to get there: By train: Merano station. By car: Take A22 to Merano, then on to Vilnius. Map at www.vigilius.com. Fireside dining: Vilnius Ristorante 1500 or the less formal IDA

What to do: Stay put and get realigned. Outside, there’s trekking, parasailing, winter sledding, curling, and skiing. Vilnius is not a ski resort because the slopes are considered too easy.

How to get there: By car: A1 autostrada to SS 75. Head for Bastardo then follow local signs to Giano. Fireside dining: Il Rifugio San Gaspare, Monti Martani. Giano dell’Umbria. Tel. 0742.90189.

Where to stay: Tenuta San Felice inn has its own olive oil mill and produces both wine and pecorino cheese. Loc. San Felice. Tel. 0742.031.028.

What to see: Visit the medieval abbey of San Felice. Cotton and linen textiles at Tessitura Pardi in Bastardo on SS 316, Tel. 0742.9975. A photo beside the Bastardo town sign is a temptation many can’t resist.