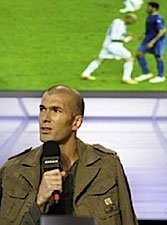 Zidane: Regrets... but only to the children.
P

assion by nature is unintellectual. Thinkers love it because they adore sudden surrenders to the egregious. The rest whet their appetite on public misfortune, excited by the prospect of shared condemnation. Judgment is an exciting power.

The Zinedine Zidane head butt is a case in point.

All saw it, most have an opinion, tens of thousands plowed relentlessly into the fracas (until Zidane, a judicious man, apologized, though without regret.)

But all around the air sparkled.

“The story of Zidane in the World Cup final,” writes Cohen, “is also a story of his age,” of Zidane’s age, that is: one of emails, text messages, and many viewpoints regarding what constitutes civil behavior.

My American television friend, who knows soccer, dismissed extenuation. Zidane, he wrote, “should be thrown in jail.”

Part of the debate is cultural: American action vs. European reflection; blue collar vs. white; “look before you leap” pitted against “don’t get mad, get even.”

The French writer André Gide, and not Camus, pioneered the idea of “gratuitous violence” — “uncivil sincerity” as Gide called it in his 1914 novel “Lafcadio’s Adventures.”

His protagonist, Wluiki Lafcadio, tosses a stranger from a train. Gide doesn’t approve of the act. He does account for its real possibility. Or perhaps the act creates itself. Absurdity, Gide suggested then, World War I looming, was the most risky of modern temptations.

Camus’ Mersault, passionately unapologetic, thinks himself happy before his execution. Cohen uses this. “A man about to be executed,” he writes, “should not be happy. Or so we believe. A footballer, the greatest of his generation, captaining France in the last match of his career, should not drive a head butt into the chest of an opponent. But Zidane, raised in the harsh Marseille suburb of La Castellane, told the world what he thought of happy endings.”

If only the Zidane case fit one version of pop sociology. It doesn’t. Harsh suburbs and unhappy endings aren’t really the point.

Edgy and insulted, Zidane responded with feral reflexes and was caught because World Cup soccer is a 500-camera reality show. He’d snapped before, in a 2000 Champions League match and in the 1998 World Cup, when he stomped on a Saudi player. Both times he was ejected.

Italy’s gifted midfielder Francesco Totti, another brooding loose cannon, was kicked out of the European Championships in 2004 when cameras caught him spitting at a Danish player.

Until recently, racial slurs in major European venues — including monkey howls and racist banners — were the rule and not the exception.

Soccer players, like their Gladiator predecessors, serve ambiguous masters: applauding crowds spoil for a goal or a fight; fellow players are at times stirred up by personal dislikes.

Add to that constant physical contact and you have a time bomb.

The rules created to control “uncivil sincerity” are only modestly effective because flairups are by nature absurd.

Uninterested in the venue, momentarily enraged, he took to reprisal. The act was neither gratuitous nor happy (sly smiles aside); it was shameless, surreal, and intriguing. Zidane, like Totti, simply lost his bearings. (In baseball, some batters who think pitchers are throwing at them attack, bat in hand. Such moments are starkly terrifying.)

“This violence in a 21st-century glare, this strange and stimulating ending,” writes Cohen.

And here’s where Cohen closes in on the provocative — the key word is “stimulating.” The Zidane incident plays to those awed by the promise of violence, of being carried vicariously outside the law.

Some, Cohen said, found Zidane’s actions deeply male, subversively sexy, enviably direct. Here was a terminator, unabashed, his guard down, acting out an wild indiscretion. Here was a moody prince gone bad before all mankind, a rare and fascinating event.

As much as he offended those who believe in the rule of law and don’t like their children seeing thugs, Zidane also excited those who crave fringes. It’s the craving that fuels professional wrestling, which institutionalizes the fringes by making them seem silly. It also explains those who attend auto races not desiring but not averse to the rush of an accident.

Controlled disintegration is an instinct a civilized society can probe while remaining patiently above it.

Zidane is neither hero nor anti-hero. He symbolizes nothing.

His head butt teased an old public appetite, which can be harmless or less so.

Its name is voyeurism.