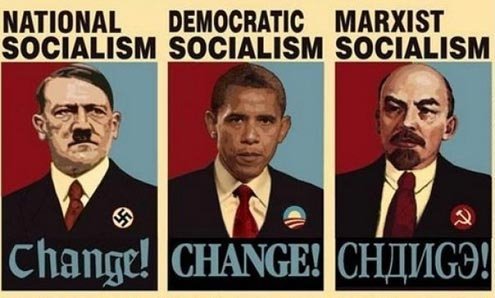 A December 2011 ad by gun company USAAmmo warned of impending gun control laws and compared President Obama to Hitler and Stalin.
A

n American friend of mine hates Barack Obama. In fairness he disliked him four years ago. Since then the feeling has decayed into irrationality. Politics and constructive criticism play no role. He just wants Obama gone.

Whenever my friend brings up Obama I try hard to change the subject. But the venom still emerges. He gargles the same poison daily.

His views once had coherent moorings. He’s never liked Obama’s party. He despises big government. He prefers local taxes to federal ones. He thinks the wealthy have a right to their riches if honestly earned. He doesn’t want to pay for bank failures or the socially downtrodden. He’s convinced America is an exceptional country that Obama has contritely downgraded into one like all others, without particular clout or consequence.

Talk radio hosts whose vocation is disdain help fuel his ardor. Their ruthlessness has helped him come to believe that Obama controls mainstream media and gives it a liberal bent. When my friend talks about Obama he repeats two words, “He lies!” Emotion garbles my friend’s sentence structure to the point that the specific lies are never entirely clear, at least to me.

My friend likes the Tea Party movement, though he admits it has no feasible electoral representative. At least the movement has ideas, he tells me. At least it displays convictions. Its members may lack Obama-like eloquence, but they tell the truth, often bluntly, in the simple, spelled-out progression of the country music songs he likes.

I try to remember when I last heard anyone so despise a sitting president. Richard Nixon was deplored, even loathed, but the mainstream free speech of his time was mostly reined in by the caveats and cautions of civil public discourse. Harry Truman and Jimmy Carter were insistently mocked. Jack Kennedy-haters, particularly its Fidel Castro-bashers (its own subcategory), cheered his assassination behind the northeast’s sad back. I use these memories to convince myself that the raging is nothing new. Only the breadth of the acrimony has expanded, for which the web deserves credit, as well as the fact that resentment is the badge of the torridly talky 21st-century self. Unless the topic is shoes or mascara, dislike and identity are twin sisters (appropriate since profanity was once called “swearing,” which meant ungodly passion said aloud.)

While briefly back in the United States, I noted (at least in general terms) that those who supported Obama four years ago support him less now, if at all, at least in public, preferring a nook in skepticism’s rafters. The righteous pro-Obama movement of 2008, irrational in its own “Yes We Can” way, has turned arthritic, senile, unwilling to recognize itself in a morning-after mirror.

At the same time, those who once doubted Obama now dislike him openly while those who found him disagreeably alien from the start, whether because of color, name or party, more readily pulverize his leadership and character. Part of this reflects one man’s inability to live up to the superhuman folklore built up around him. Another part is how the fury directed against him has become an enriching life force among those who endorse insult as an antidote to dismay or as a strategic position, or both.

My friend insists Obama is a socialist. It’s an old accusation, one that Democratic Party presidents have lived with for a long time. FDR was also labeled socialist, but the charge didn’t get far since capitalists were no one’s favorite people in the haunted 1930s, their system in chaos until rescued by World War II and its globe-changing aftermath.

I scour my friend’s speech for hints of what it is he might want, a Mitt Romney, a Newt Gingrich, a something else entirely. But I get nowhere. These names mean little to him. I am always stuck — no, we are always stuck — on the first groove of a broken record whose only working component is Obama. America, he tells me, is going downhill. There’s no changing that. At least let’s kick out the liar.

No doubt my friend’s reviling will get its full airing out in the mud-slinging months to come. Soon, Republicans will pick some man (any man), and Democrats will fall back, not a few of them sullenly but necessarily, on their own incumbent, whom traditional party allegiance suggests they’re bound to support no matter what. They will nuzzle back toward Obama as fear of his ouster gains traction, and it will.

A lot of Americans are angry, my friend says, jerking back to life. They feel misled. I nod. He then asks me if I want to know why. I tell him no. I need no reminder. Repetition is a powerful tool. But whether November will buy into his intolerance is anyone’s guess.