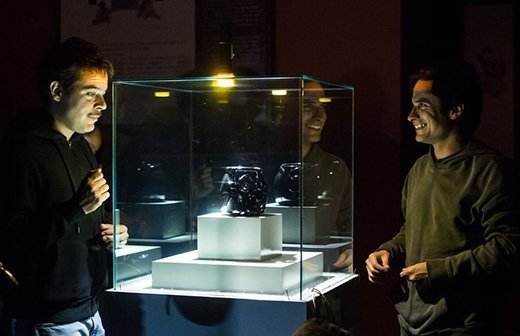 Juan Nuñez (Gael Garcia Bernal), right, and Benjamin Wilson (Leonardo Ortizgris) seem like kids in a toy store as they prepare to steal priceless artifacts from Mexico's National Museum of Anthropology.
I

t’s convenient and often useful to classify films: this one’s a buddy film, that one’s a rom-com, another’s a chick flick, and so on. That game doesn’t work for “Museo,” a rich stew of genres. It’s a buddy film, a father-son film and a family drama, with a dash of documentary and a nod to suburban angst, all circulating around an entertaining (if not entirely believable) caper-heist, and its aftermath. Better still, it foregrounds the issue of causation yet offers no easy answers — and it stays away from the bête noir of many films featuring flawed protagonists: the therapeutic.

At the center of this story based on the 1985 robbery of the National Museum of Anthropology in Mexico City, is Juan Nuñez, sensitively and credibly portrayed by Gael Garcia Bernal (“Y Tu Mamá Tambien,” “The Motorcycle Diaries”). Juan is a troubled, sullen, passive-aggressive (and sometimes just aggressive) young man in his twenties, fitfully studying for a degree in veterinary medicine, at odds with a demanding and judgmental family that mocks him as a failure. He’s also more than a little bored with the round of life in Ciudad Satélite (“Satellite City”), a far-flung suburb of Mexico City. Much of the action takes place around Christmas, offering Juan ample opportunity to play the bad boy. On one occasion, he’s irritated that he has inherited from his grandfather the job of playing the family Santa; on another, exhibiting a visceral distaste for inauthenticity, he shows the younger children where “Santa” has hidden their wrapped gifts and urges them to open their presents then and there. 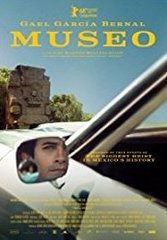 Juan’s only companion is devoted follower Benjamin Wilson (Mexican, too, despite the name, played by Leonardo Ortizgris), a pet groomer and the film’s narrator. There’s a hint that Wilson’s loyalty is payback for assistance that Juan rendered years ago, and that would help explain Juan’s selfishness, his disregard for Wilson’s feelings and needs. Juan dominates the film, and the viewer cannot help but root for him. Yet he is not always likeable and not always ethical.

Juan seeks excitement, admires the daredevils who dive from ocean cliffs, and courts death on the highway while disregarding Wilson’s terror. But the bold, “Topkapi”-like theft he plans and attempts with his buddy apparently has a deeper meaning than the desire for high-risk thrills. That meaning is foreshadowed in the film’s documentary opening: 1964 footage of an enormous statue of the Aztec god Tlaloc being transported from its original site to Mexico’s new National Museum of Anthropology. Lacking a solid sense of identity and place himself, Juan is disturbed at the displacement and objectification of the statues and other sacred objects that reside in the museum. As a museum intern, he watches them being isolated and photographed, distanced from the sacred.

Even so — and here we encounter the film’s admirable complexity and nuance — Juan’s concept of the sacred is gradually revealed to be shallow, perhaps naive. He makes a symbolic nighttime offering to the gods at a Mayan pyramid, and his desire to “liberate” artifacts from the museum seems genuine. But his subsequent treatment and use of the “priceless” liberated objects — cleaning one with a toothbrush, using others to build sand castles or do a line of coke–reveals ignorance and thoughtlessness. Although he shows concern that the artifacts might end up in a British museum (a fate even worse than a Mexican one), his desire to sell the objects and reap a cash reward easily overpowers whatever scruples he might have. Without giving away the ending, one can say that Juan remains ambivalent — and to the viewer, refreshingly opaque.

The strengths of “Museo” include its combination of serious themes with a light- heartedness, of realistic filming with campy techniques. The two buddies are both funny and serious, clever and hapless, worthy of the viewer’s investment and yet laughable. When they break into the National Museum, Juan and Wilson are shown in ironic, posed freeze-frames as they steal 140 objects under the guards’ noses. Museo closes with more irony, and a curious reality: the theft, which shone a light on the museum’s wholly inadequate security measures, dramatically increased attendance.