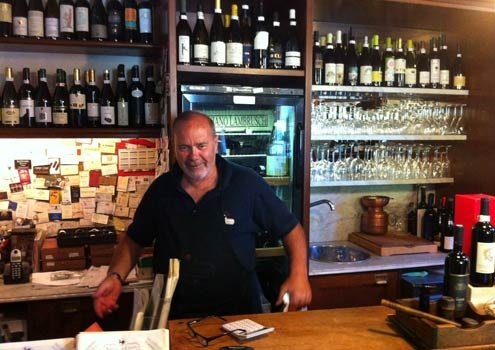 hot, hazy veil of heat descended on Florence just as I arrived to spend a couple of weeks. It felt like a viscous liquid flowing into every corner of the city. Every morning around 10, I closed the heavy wooden shutters of the villa where I was teaching yoga, hunkering down in the shadowy, high-ceilinged room to wait out the worst of the afternoon heat. It reminded me of visiting relatives in Memphis, Tennessee in the 1960s, before air conditioning was ubiquitous in America.

One evening, friends invited me to a garden dinner party that started at 9 p.m., asking me to bring white wines to accompany a light dinner of fruit, salads, and cold meat and seafood dishes. This gave me a great excuse to visit my two favorite well-stocked Florentine enotecas, or wine shops.

I thought I’d share them with you, as well as the wines I purchased.

— La Buca Del Vino: Via Romana, 129 (between the Pitti Palace and the Porta Romana).

Only about two people at a time can fit into this tiny enoteca. Customers seeking special wines will find an appealing selection of wines made using “sustainable production” methods (and many certified as organic). Most range in price between €10-60.

The economic downturn has led the owners back to the old tradition of offering good vino sfuso (wine pumped from demijohns into bottles) instead of crowding the shelves with bottles of cheap, industrial wine. The shop, which opened in 2005, has lots of spirit and savvy. I chose:

If you didn’t know to look for it, you might drive right by the Vinoteca, located along the old Roman Via Cassia on the way to Florence’s Porta Romana. Non-descript from the outside, the inside is expansive and beautiful. The shelves contain a Who’s Who of elite Italian wines. Prices range from under €10 to hundreds of times that.

Andrea Formigli opened the enoteca in 1998. I met with an associate, Luciano, who remembered me from a previous visit. A burly Tuscan, he raced from shelf-to-shelf, bringing down a host of bottles while transmitting contagious enthusiasm and encyclopedic knowledge. Questo vino, Signora, è una bomba, Le dico… una bomba! (“This wine will knock your socks off…”) he sang out more than once. We traded shoptalk, laughed, compared prices, and eventually came up with the following selections:

As for the garden party, the cool evening air brought everyone back to life. We chatted and lounged on the grass, eating and drinking until sometime after midnight, rounding out a summer night in Italy.