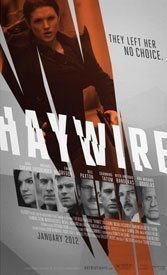 No faulting a capable director for having good fun, and Steven Soderbergh clearly does here. No pure pulp action movie on his résumé (the “Ocean’s” franchise doesn’t count), he fixes that courtesy of eye candy former martial arts star Gina Carano, who plays no-nonsense Mallory Kane, an ex-Marine turned black ops contractor off the grid after some nasty European goings generated by boss and former lover Kenneth (Ewen McGregor). The how and why matters less than Carano’s capable incarnation of a cynical, smart, 21st-century Wonder Woman — daughter of a Semper Fi dad — for whom violence is foreplay and vice versa, putting all male genitalia at risk. Says Kenneth: “You shouldn’t think of her as a woman. That would be a mistake.” Uh-huh.

It’s a no-gristle story with a punch. Surrounding camera-friendly Carano with semi-cameos from A-list male stars helps (try Michael Fassbender, Antonio Banderas, Channing Tatum, Michael Douglas, Mathieu Kassovitz and Bill Paxton). So do Barcelona and Dublin as locations and a strong catchy soundtrack from Northern Irish DJ and composer David Holmes. “Knockout” doesn’t try to be any more than it is: a quick fix comic book matinee action flick that lionizes a sexy woman with balls.