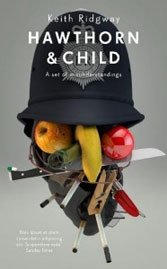 Here is a novel as a menacing vortex, as the sum of human ruins that grow more intriguing and alarming by the chapter. You meet Hawthorn, “a skinny white man with a grin,” gay and self-involved; Child, black, literal, pragmatic (“Glasses. Raincoat.”), the two of them young London cops charged handling a drive-by shooting from a vintage car. Or so it seems. But the case is a Matryoshka doll with a cast of innards that together compose a perfectly alarming vision of urban life. It’s detective fiction channeled through metaphysics and the macabre in which the culprits are eccentricity, idiosyncrasy, and derangement. There’s a book editor who imagines himself as a serial killer who’s found a conspiratorial manuscript about a London “populated by wolves and ravens and wild dogs and foxes and a network of rats….” There’s a racketeer named Mishazzo and his driver, one cool, the other paranoid, but both unbalanced. There’s a man who thinks Tony Blair has hatched a plot against him, “an unconscious, unarticulated conspiracy,” and a youth named Moss who’s convinced he’s Jesus and terrorizes his way through backstreets while ruminating in reverse: “What is the point of lost years if not to fill them with losses?”

Ridgway promotes all this through a lunacy of language that snaps poetry’s neck in the neatest of ways (“The poisoned evening spun a little.” Not a lot, mind you, just a little). In the end, he serves up a dead-end potboiler through which detectives Hawthorne and Child are shot like cannonballs. It is a noxious ode to London that has the linguistic ring of Ted Hughes’ in his “Crow” period, humans as slivers of meat seen from the vantage point of some more primordial species.

Ridgway is said to be in the tradition of Irish modernists, sharp and snarling, language in his thrall, but he’s into a further along into a phase in which the world has fallen apart but continues to exist before our very eyes. In the final vignette, a soccer referee who is also Hawthorne’s lover says he sees ghosts on the pitch. Maybe it’s joke; or maybe, like someone else, he’s “cracked like ice,” since fissures are everywhere.

In an age in which many successful American novelists tend to dwell on family dysfunction and domestic disturbances as a narrative honor, here is storytelling that goes a step further because the writer recognizes the world doesn’t work and knows how to prove it in words.