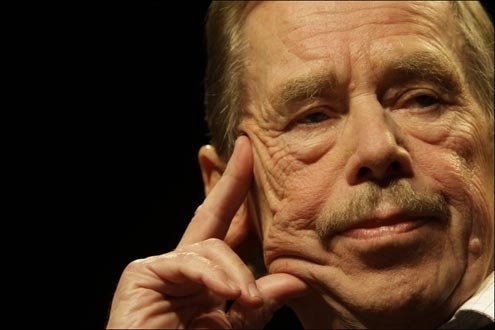 Václav Havel: An intellectual trapped inside a president.
R

everence can falter up close. Jonathan Swift, a great debunker, focused on creases and warts. In Václav Havel I saw a slouched one-lunged playwright tucked awkwardly into a presidential business suit. The year before, in 1999, I’d met Pope John Paul II on a Mexico-bound plane. Clad head-to-toe in white and gnarled by disease, he looked like a defective snowman. Two months into the millennium it was Havel’s turn.

In fairness, Havel never looked presidential, perhaps in keeping with his Czech Republic, a casually-dressed state in many ways unconnected to once-grand Czechoslovakia, home to well-coiffed Prague coffee shops that before World War II and communism entertained the likes of Kafka, Einstein and Freud.

I’d been summoned with a group of journalists to hear Havel’s views on Europe. Already in his second and final term, his lungs corrupted by cigarette smoke, his throaty diction was amplified by a translator. He avoided English, saying he had only a feeble command of it.

We in were in Prague’s Habsburg presidential palace, its spires like spears, a monument to an elitism into which Havel didn’t fit. He’d been an anti-Communist dissident whose habitat, for more than a decade, was jail. His sense of place had been corrupted by the informality of authoritarianism. But his mind was another matter.

It’s hard to imagine a recent national leader who most properly approximated a philosopher king. Though elected, Havel was perceived as a liberator, a folk figure hastily transformed into a politician. He found party politics asphyxiating (so crude; so slowing) and despised his adversary (and successor) Václav Klaus, who goaded him by opposing Czech involvement in the now-troubled European project. Klaus was perhaps Europe’s most eloquent skeptic, and remains so.

We sat in a room with 25-foot ceilings, a few journalists around a table with Havel at the head. He eventually retreated to a plush chair in the room’s corner, into which he seemed to disappear, his arms slack at the side. We were instructed to ask questions in order, but Havel preferred café hall spontaneity and overruled his spokesman.

What, he was asked, did he think of the rise of European nationalism, mostly from the extreme right? Austria, Italy, and even France seemed under its sway. As the adoption of the euro neared, many states felt uncomfortable pledging allegiance to the European club, as if to do so condoned some basic national disloyalty.

Havel though about this, coughed, and produced a typically idiosyncratic response. “What else,” he said, “was to be expected against the larger idea of a new consensus order based on justice, equal rights, and common values than an outburst of national egoism? In the 20th century, Europe has always put on blinders, chosen appeasement, bargained with evil. The fact that it can now say, even if only symbolically, ‘Here is some danger,’ proves Europe has absorbed its history.”

The jail-time, dissident side of Havel was wedded to good and evil, opposition and appeasement, right and wrong. He refused the middle registers. In it lay the worst of politics. He was a luminous conservative misperceived as a kind of liberal because his stubbornness helped bring down Czech communism.

His response to Czech entry into NATO, denounced by the new Moscow, was similarly roundabout, even peremptory. “Whether current society likes it … doesn’t matter from a historical perspective. If we show that [NATO accepting] a so-called post-Communist country means to accept some schizophrenic, unpredictable partner, there will be no further [EU] expansion. It would turn the tables not only against the non-accepted nations, but against the whole of Europe.”

Havel’s underlying view ironically promoted an “End of Europe” Europe, self-aware as a whole and slowly levered away from its traditional divisions, bonded to a whole that so far at least has yet to materialize. But hope was strong a decade ago. “We are in the very center of Europe,” he said of the Czech Republic. “Nothing will go around us. All wars will go through this territory, unless we ourselves start them. The tradition is to close ourselves and let the winds go around us … Now we must stress, in this globalized world, that everything matters to us; that we don’t lie our way out of responsibility.”

The lying he worried about, as it turned out, was financial, not military. Ironically, the Czech Republic, poised to adopt the euro in 2012, backed away under Klaus, bowing to resistance from Czech public opinion, letting the winds go around it, as Havel feared. It’s been a mixed blessing.

Havel insisted Europe had always been a single political entity, but one divided by violence, but the “principle of bigger or smaller violence committed by the ‘powerfuls’ against the ‘less powerful.'”

The EU was the “first European effort to construct order based on some other principle.”

What did worry him about Europe as it grew was the growth of unrealistic expectations on both sides. A larger membership might make the project unwieldy, all the more reason to phase in demands. The mixture of “market economy with Mafia practices” worried him both at home and in Europe.

“Accepting a new political culture,” he said, “is harder than accepting an amendment to a law. It’s not just about how many watts a refrigerator or a bulb needs. It’s not that easy. The EU must understand that it can’t set the bar too high, then wait and see if we can jump over it in 20 or 30 years. That would be a catastrophe for all.”

In principle, the bar was set high, but its loopholes incandescent. In the months before he died, Havel witnessed an introduction to the catastrophe her feared. It hadn’t taken 20 years.

At the end of the 1999 meeting he didn’t shake our hands. Tired, he nodded, still semi-hidden in the large chair. The writer had said what he had to say. Now he wanted his privacy.