Harvest and you shall learn 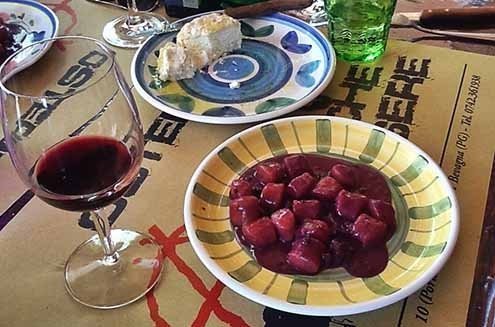 Gnocchi al sagrantino: Harvest and you shall learn.
M

y first paid job was to harvest grapes at a local farm. Though it was a long time ago – I’d just finished high school – I still recall the thrill of being in the vineyard early in the morning. It was a cool September that year, and the Umbrian valley was veiled in thin fog.

There was a bunch of us, students mostly, cheerful but not well organized. It felt more like a party than like work.

I baked cake in the evening and shared it with the team for our mid- morning break. We sliced it with the same scissors we used to harvest. For us city kids, this gesture was daring and comical at the same time. We had homemade sandwiches for lunch and we ate them lying in the thick grass under the vines. It was always sunny by lunchtime.

It was in those days that I first realized the intense beauty of the purple bunches of grapes. I was 18 and I’d never applied the word beautiful to grapes before. I’d been too busy with Baudelaire and Neruda.

The memory makes me believe everyone should take part in a harvest once or twice in a lifetime. It’s hard work, yes, but the joy of harvest is primeval, it takes you back to a simpler self, it’s the good part of having to struggle to make your own food.

Also, it gives you a sense of community comparable with any social gathering in modern life. As my friend and American transplant Michelle Damiani writes in her wonderful account of life in rural Umbria, “Il Bel Centro: A Year in the Beautiful Center,” once you’ve harvested something from the earth you’re also part of something. You’ll have new stories, plenty of gossip and some songs on the side. You’ll compare the scratches on your hands, and notice how your nose is sunburned and your back hurts from carrying all those crates.

And, as always in Italy, there will be a recipe worth sharing at the end a of a long day.

— Sauté the guanciale in olive oil until crisp, add the onion and cook until lightly caramelized. Add wine, deglaze and reduce for about 20 minutes. Add cream.

— Meanwhile cook the gnocchi in plenty of salted boiling water. When they float to the surface, remove from the water with a slotted spoon and transfer them gently into the sauce. Sprinkle with grated pecorino and cracked black pepper and serve.