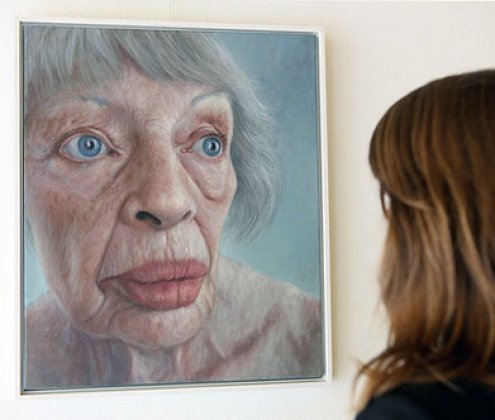 There's no such thing as frozen in time.
T

wo weeks ago, my sister, Joan, called to say that Aunt Loukie passed out in church and was taken to the hospital. Aunt Loukie (92) is my mother’s younger sister. She lives with Aunt Harriet (97), in Harriet’s pretty two-bedroom house, surrounded by roses. At the hospital Harriet admitted that this has happened before.

Last summer I was shocked to see how thin Loukie had become. She slept most of the time and was frequently incontinent. She wouldn’t use a walker, yet tottered and weaved, every few yards sitting down to rest. She wore her red wig oddly askew. She refused to be fed but, when I loaded her fork, couldn’t bring it to her mouth. I suggested nursing care, either with an Italian-style caregiver, a badante, or in the home where my mother is well cared for and happy. They wouldn’t consider it.

My mother, a widow with three children, is blind and nearly paralyzed with Parkinson’s disease. Her diabetes and blood pressure are carefully monitored. She swallows 30 pills a day. Harriet and Loukie never married. They rarely see a doctor and avoid taking medicine. Yet their health has been good. Until last spring, Harriet drove her car.

Mom says that Harriet has always been reserved, even when they were children, sleeping three to a bed, upstairs in Grandpa’s North Michigan farmhouse. Early in the morning Grandma would light the wood-burning stove. Heat would filter up through a register in the floor, until it was warm enough to dash across the icy linoleum to the chamber pot in the corner. Harriet didn’t giggle or whisper her secrets, under the blankets. She often cried but wouldn’t say why.

Harriet played the organ in their little white church, with its long slippery pews and stained glass windows. The two-hour Calvinist services were preached in Dutch, morning and evening, every Sunday. Harriet says one of the most beautiful experiences of her life was listening to the organ in Milan’s cathedral, where she felt her “soul soar upward.”

When I started piano lessons, Harriet took me to hear the Grand Rapids symphony orchestra. We sat in the third row. I don’t remember the music but I remember Aunt Harriet’s beautiful dress and sparkling earrings and how much she hoped I’d enjoy it.

After I moved to Italy, Aunt Harriet remembered every birthday — my family’s and mine — with cards written in her elegant script. She would ask me about my life here.

Both Harriet and Loukie were painfully shy. Loukie, with her carrot-colored hair and thick glasses, was considered plain but Harriet was beautiful — a dark-haired Grace Kelly. Mom says boys asked her out but she was afraid to talk to them.

When she was in her 40s, Harriet’s employer, Mr. Clark, a wealthy, older man, asked her to marry him. They drove north together from Grand Rapids to request Grandpa’s permission. Grandpa refused because Mr. Clark was a Methodist. Harriet obeyed.

Mom thinks Mr. Clark, who died long ago, provided for Harriet in his will. That is how she was able to buy her house and that is why she will never leave it.

That house is filthy now. Harriet, who was so meticulous! Our cousin suggested a cleaning woman but Harriet said they didn’t need it. Loukie said, “We don’t want people traipsing through here, moving stuff around.”

Their clothing is stained but they refused Joan’s offer to do laundry. Their washing machine is in the basement. Harriet must slide down the stairs, feet first, in a sitting position. As a teenager I championed the human right to be dirty but now I think, we can’t let them live like this.

In the hospital, we learned that Loukie’s problem is her heart. She needs to see a cardiologist. What’s more, Loukie’s skin is unwashed; there are feces under the fingernails.

A social worker proposed home help for personal hygiene. Loukie panicked, pleaded for Harriet’s intervention. Harriet said, “No thank you. We’ll manage.” She said they might see the cardiologist another day but now they were going home.

They are of sound mind. We can’t force them to accept medical care. Joan said, “If you don’t get help, Loukie will die. Is that what you want?”

“I’m not afraid to die,” Loukie said, “but I want to die in my own home. Not in a hospital or in a nursing home, with strangers looking at me, telling me what to do.”

I’ve always thought that, in the absence of pain, the last thing to die is the will to live. My mother, who still enjoys her limited life, bears this out. But when I imagine life with a badante or in a nursing home — the gradual loss of faculties, the loneliness, embarrassment, the medical prolongation of almost-death, I think, three cheers to Loukie and Harriet, to stubbornness, to the right to die the way you want.

Finally, amidst the worry about Loukie, it was Harriet who died in her sleep two nights ago. Loukie will now room with my mother in the nursing home.

Dark red roses — Harriet’s favorite — arrived at the funeral home. Boxes and boxes of them, thousands of dollars worth. They were from Mr. Clark. His will called for them, 40 years ago.