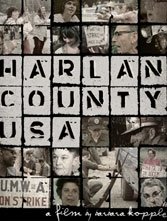 It seems like a crazy, even deadly move: standing up to gun thugs to film the nation’s most contentious coal miner strike since 1902. But director Barbara Kopple took a selfless risk in documenting the men and women of 1976’s “Harlan County, U.S.A.”, who struggled for years in the name of labor rights against cold-blooded Duke Power Company armed to the teeth with rifles and indifference.

People die in the film, and it’s not just from black lung disease. The Kentucky town’s unsympathetic sheriff leads a drive-by shooting at the underpaid, overworked strikers; a sheriff’s cohort knocks Kopple’s unwelcome camera to the ground. It’s a Mexican standoff every time the strikers block the roads. But there’s triumph to be found, especially when the coal miners’ wives scare off honking, infuriated traffic with a mighty chorus of “We Shall Not Be Moved.” In a world where music alone makes evil cower, pipe dreams feel suddenly possible.

Then, hit men slay the miners’ beloved union representative Joseph Yablonski and his family in their sleep (Yablonski’s callous rival, UMWA president Tony Boyle, was eventually convicted of the murders). A grieving mother collapses at the coffin of her young son, dead after a fatal scuffle. At last, a close-up of brains scattered in the street. It’s too many casualties before the powers that be call truce.

Labor rights aren’t the only issue here. Kopple, herself a woman in a male-dominated profession, shows it’s a group of unyielding women who lead the resistance to success. These hard-bitten leading ladies make their coal-mining husbands and brothers look a mere supporting cast. Music keeps moving the coal miners into action: Hazel Dickens and Merle Travis cameo with their high lonesome, political bluegrass. It’s true that the best songs come from the most oppressed peoples, who drink in sorrow like ice water.

If “Harlan County, U.S.A.” has one lesson it’s this: that it’s not the wealthy fat cats who represent the American Dream. It’s the working class. Winner of the 1976 Academy Award for Documentary Feature and selected for the National Film Registry.