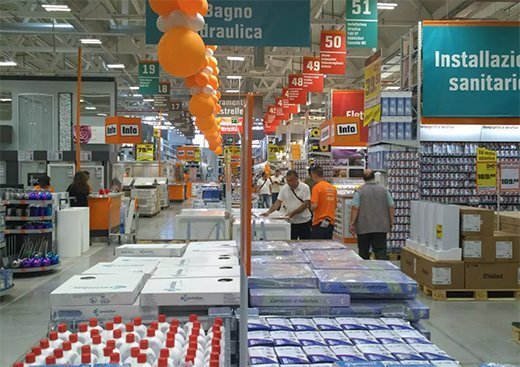 he sliding doors open and I have to hold myself back from literally jumping up and down with joy. To my left, an elderly Tuscan is prophesizing the number of cylinders on a red riding lawn mower to his uninterested grandson. Behind him, a bin of spring bulbs are on sale for €1.50. I’m up to my elbows in bulbs searching for a peony before I remember that I’m a terrible gardener.

This is my happy place. This is Obi.

For those of you unfamiliar with European hardware companies, Obi is our Home Depot. Both sell the same stuff. Both use Home Depot’s toxic wasteland orange as a signature color. But Obi ups the ante with a bucktoothed beaver as a mascot — whose meaning is likely lost on Italian shoppers unfamiliar with the expression “busy as a beaver.”

I’m not revolutionizing gender stereotypes by saying I love home improvement stores. I drove more than an hour into the wilderness of abandoned palazzos and half-finished cement brick homes that is rural Lazio to go to this Obi.

I come from a long line of tragically incapable, but admirably committed men who never let their inability stop them from trying to build something anyway.

We don’t have a hardware store in our Tuscan town of Manciano. Our mom and pop operation closed a couple of years ago because mom and pop’s son had a drug problem and a theft problem and a not-paying-the-rent problem. So now when I want to buy a can of paint, I have to plan it like a trip to the bloody zoo or a family vacation. Write a list. Pack snacks. Organize other things to see-do so the entire trip doesn’t feel like a huge waste of time. Suppress the thoughts that you have truly gone from City Mouse to Country Mouse in your own off, off Broadway production of “Of Mice and Men,” a book you have never read and therefore have no knowledge of beyond this tired mouse reference.

We’re trying to sell our house, but before we put it on the market, there are a few little jobs I want to do. My husband Giulio and I discussed the possibility that our house will actually sell. He put it at an optimistic five per cent, which belittles my home improvement efforts. Manciano’s real estate market is dead and it’s hard to imagine repainting the tired-old doorknobs will be the thing to convince someone to throw down a shit ton of money on a town that doesn’t even have its own hardware store!

Still I like spending my weekend making a hash of my many DIY projects. I have all the passion of a YouTube DIYer and none of the skill. I come from a long line of tragically incapable, but admirably committed men who never let their inability stop them from trying to build something anyway. Both my dad and grandfather almost cut their legs off with power tools and my brother built a very nice brick wall for his vegetable garden, but stacked the bricks up like Lego pieces instead of in alternating courses.

I grew up watching men fail at DIY projects, so I have no outdated, sexist expectations. I learnt that if you are too cheap to hire a handyman (and I am) and you refuse to let your family hire one (which I did) and all the men you know shouldn’t be allowed near anything with a power cord, then you have to do the job yourself.

One of the first DIY jobs I completed was replacing all the screens in our screen doors. I was 15 and did it by myself while my brother played PlayStation. Two winters ago, I replaced a broken central heating tube and tried to fix a leaky toilet only to be foiled by my lack of strength when it came time to tighten the nuts. The tradie next-door neighbor came to the rescue on that one.

So I didn’t bat an eyelid when the ridiculously muscled shop assistant at Obi kept giving Giulio sidelong glances while also looking down my top while also pretending to help me find the type of paint I wanted.

I start a project convinced I know what I’m doing, lose interest halfway through and sort of mash it all together at the end for a finished product that looks like it was made by a well-meaning fourth grader.

Don’t worry, Giulio didn’t notice. He was penning an inflammatory Facebook post about the upcoming European elections on his phone and eagerly refreshing the page to see how many friends had commented.

It wasn’t until I met my father-in-law that I realized just how poor my DIY efforts are. I have a slapdash arrogance. I start a project convinced I know what I’m doing, lose interest halfway through and sort of mash it all together at the end for a finished product that looks like it was made by a well-meaning fourth grader.

My ‘suocero’ used to be a carpenter and can tackle any DIY task from installing light fixtures to fixing broken piping like a pro. I can’t honestly say whether Giulio inherited any of that talent since he fastidiously reserves his DIY activities to putting together IKEA furniture and whining about all the money how could be making if he could get back to his computer and pay someone else to paint the pergola.

He’ll tag along to Obi as long as you don’t ask him for his advice and never let him take his eyes off his phone. The moment he looks up, he’ll hit you with a, “We’ve been here for ages. Can we go now?” regardless of whether we’ve been in the store for five minutes or 50 minutes.

Admittedly, I could spend all day in Obi fantasying about projects that are completely out of my league. It’s the latter that keeps me coming back. Every year as the weather starts to warm, I make that hour-long journey to wander those bright orange aisles, brushing my fingers longingly across power tools I wish I knew how to use and stocking up on everything I need to fix my DIY failures of springs past.