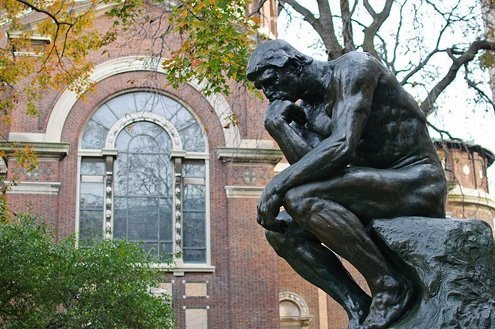 olumbia is hard,” said the two deans at the front of the room at orientation in January. I would hear those same words more than once. I had just moved from Rome five days before, and the windowless rooms where I sat were completely new to me. Outside, deep, grey winter gripped New York City: bare trees, dirty sidewalk and snow. Inside, I’d become an undergraduate student after 14 years away from college.

I am what Columbia’s School of General Studies terms a “nontraditional student,” having taken a circuitous route to my bachelor’s degree.

After the fourth or fifth repetition of “Columbia is hard,” a palpable uneasiness began rippling through the other new students in the room. They laughed nervously, glanced at their phones, ruffled through their bags. Then a hand shot up, “Are you trying to scare us? I mean, we all signed up for this knowing that this school is hard.”

One of the deans smiled. He was a box of a man wearing a pastel bow tie. “Well, yes and no. We want you to know this school is hard in ways you might not expect. We want you to be ready for them. That’s what orientation is about.”

It’s now the end of May. I’ve finished my first semester. I now know first hand what the bow-tied dean was getting at. In recent months I’ve acquired a more nuanced definition of the word hard. I assumed the dean meant the school was academically difficult. But the hard work in question was much broader than that.

Yes, there were piles and piles of readings, quizzes, assignments, exams, papers, essays, classes, discussion and critiques. But these were also combined with my part-time job. Together, they consumed every square millimeter of my life. One month into my bitter winter of study, I felt a sharp pain. It was the realization that what I now longingly refer to as my “normal life” was no more. Gone were the Rome evenings of long dinners and wine. Gone also was an apartment without roommates, walks to get to places, spontaneous chats with friends, and above all the time to reflect on what I was doing and writing before actually putting it down. Gone were the Roman shouts in the street below my window, the city’s sunny if cool days, and delicious Italian fruits and vegetables.

Instead, my face tilted down, I quickly passed into and out of the freezing city on my way to campus. I held my mind to the tightest of schedules and pretended nothing existed but the challenge before me. The school life created a loss of another life that no dean at an orientation could have possibly have prepared me for.

I wasn’t alone in feeling this way. Single-minded commitment is a requisite of the academic world if you take it seriously. To that you need to add “the Columbia bubble,” the isolating world of the campus into which you disappear.

Confronted with academics and the academic life, there’s a surreal sense of two worlds, the within and the outside. On my first day of class, as professors described their lines of research, I was skeptical, “Really?” I thought to myself. “This is what you’ve spent your entire life doing? What about all that’s going on outside?”

Yet there’s a kind of nobility to academia. Professors and graduate students work to preserve minutiae from extinction in an otherwise careless capitalist world, hoping that intellectual inquiry can improve life. It’s a sobering goal. At the same time, the insistence on such minutiae can sometime seem childish, elitist, isolating and unconnected to life as it is lived outside a campus.

At 21, I was unconvinced of a bridge between study and life. What I was learning in the classroom, I thought then, had no connection with what was happening outside it. I dropped out. I chose experience over reading about experience and set out to travel. I suppose my return satisfies a craving for the opposite: to connect intense study with my life, at least for the time being.

So yes: the first semester was as hard as advertised. It decimated aspects of my life. Yet I’m glad to be back. I like the structure, the challenges, and the back-and-forth that goes with trying to learn.

Columbia’s campus perfectly mimics academic life, situated like an island in the frothing current of New York City, but unaffected by the maddening flow. There are venerable libraries built in imposing neo-Roman style, warm-colored brick halls, dormitories, a few modern buildings, trees, benches, flowering bushes and green grass in spring. The campus has no streets and no cars. It’s everything New York City is not. It emanates the severe tranquility of Rodin’s “The Thinker,” a replica of which sits in front of Philosophy Hall. It’s become my favorite place in the overwhelming city, perhaps because it’s the only one I know well. Six months isn’t a long time. But I get the feeling that after another semester, I’ll no longer be as aware of the gap between my old life and this new normalcy. The hard will have hardened into the normal.

— The author wrote The American’s “Nomad” column for four years before returning to the U.S. in January.