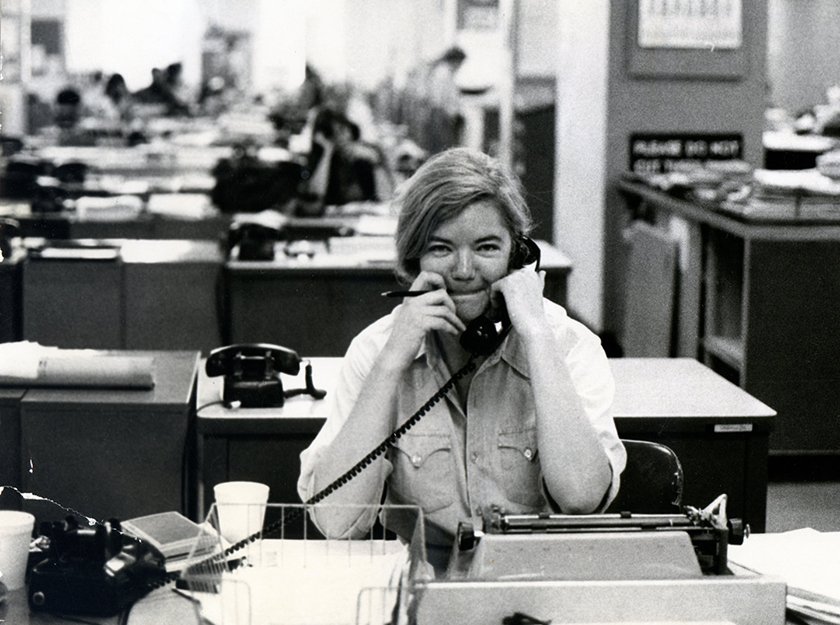 Columnist Molly Ivins during her brief stint at the "New York Times": in the late 1970s.
W

ant a lively verbal tussle with someone who’s snappy and smart? Say the word and I’ll send you my Aunt Molly’s number.

Aunt Molly’s from Texas, a retired lit professor, who spent her youth swearing by the words of a handful of columnists, another Molly — Texas’s own Molly Ivins — in pole position. Ivins spent the better part of a career challenging preconceptions and double-talking politicians. She was sharp, fun to read, and wise — and don’t tell my Aunt Molly otherwise (or she’ll turn to a 1990s tidbit from “Forbes” that reads: “Whether one agrees with her or not, Ivins’s pen pierces both the brain and the funny bone”).

Aunt Molly used Molly Ivins to supplement headlines and get insight from an insider. She also read the columns of George Will and William Safire, both very much on the Republican side of domestic and world affairs, but both also classy, neat in their arguments, and never hysterical.

The underlying part of our chat was about information as power, that old chestnut that probably holds truer than ever in the social media age, if only all the information out there was correct and unbiased, which it’s not. But putting that aside, there are more sources of news and opinion than ever before.

So why is it lots of people are tuning out of mainstream news and op-ed, opting instead for their best friend’s Instagram pictures or conspiracy theories about COVID? Donald Trump played a role, for years peddling his “fake news” jargon to the point all news seemed potentially fake, never mind your political position.

The other reason is that mainstream news outlets that once distinguished between news and opinion, parking them in separate places, took a cue from the emotionalism they saw on the web and started spiking headlines and news reports with sensationalism. That happened on the right and the left, and it gave fake news-ers wide berth. Networks went to war, CNN vs. Fox, and so on. Everybody had a side, and if you mentioned a news outlet you liked it very likely had a place in the liberal-conservative battlefield.

Information continued to be power, but filtered information, filtered as through insightful opinion writers, lost credibility. They were no longer free thinkers but propagandists in the name of whatever organization they worked for. They couldn’t be trusted, nor could news, so you’d just as well tune in to a friend.

Too bad for this, says Aunt Molly, who points out that very famous time in 1992 when Safire, the “New York Times'” most level-headed conservative, told his readers, “hold your nose and vote Clinton.” It was dignified heresy, but he backed it up with a plethora of doubts about George Bush the elder.

“This is what was great. These people could surprise you. They weren’t chained to any party or folded into one movement’s SWAT team.”

Now that such columnists are gone, it’s harder to separate wheat from chaff.

“Take the virus,” adds Aunt Molly, “you’re referred to specific medical experts or to data or science, as if these two were so absolute, to challenge them is stupid, unwise, something to be mocked.” The truth is the opposite, she insists. Doctors may have data and remedies but they have little understanding of what their recommended actions can do to life as we know it. “They just wanna save people, which is what they were trained to do, but someone like Ivins would have asked them about the price of their recommendations; she would have been the best kind of sniper.”

With opinionists tainted, the data people make war on the skeptics and there’s hell to pay daily.

With opinionists tainted, the data people make war on the skeptics and there’s hell to pay daily. Sure, TV commentators slip into the picture, but they often end up stepping on each other’s lines and leading to more tune-out.

As Aunt Molly puts it, “Everything is breathlessly important or historic, and that’s just for starters.”

Columnists once bridged the gap between front page headlines and the letters column. They were basically charged with making sense of what was going on without taking so intense a partisan position that someone of another persuasion would tune out from the start. That premise is shot. Now it’s the other way round: you sell your position, offend the “other side,” and go from there. Most Americans don’t even have a favorite columnist any more. A favorite blogger or Instagramer or Youtube personality, yes, but not someone anointed by the so-called “establishment” to weigh in on the issues of the day.

Aunt Molly had a son stationed in the Middle East and active in combat operations during the first Gulf War. She feared for his life daily. But she also read the columns of Tony Lewis, an avowed critic of the war. Why? “He’d covered the Supreme Court for a decade before that, so I trusted his judgment, even though I had to bite my lip at times.”

Allowing those who might not agree with your views to contribute to your thinking by coolly challenging assumptions.

What a novel concept. Aunt Molly might be on to something.