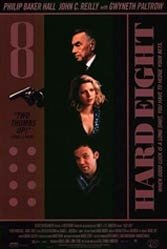 Anderson’s downbeat first feature endures in the way of a vintage first novel: It is honest, dissonant, and supremely self-possessed. Roughly sketched out, it follows an enigmatic old school gambler named Sydney (Philip Baker Hall), who for reasons unknown picks up a down-on-his-luck drifter named Joseph (John C. Reilly) outside a Nevada coffee shop and befriends him, gradually becoming his father figure. Coincidence? Not quite.

Anderson compresses two years and sets chain-smoking Sydney and now-acolyte Joseph in Reno, where hooker Clementine (Gwyneth Paltrow) and thug Jimmy (Samuel L. Jackson) enter the mix to make sense of the odd father-son equation. What most interests Anderson is Sydney’s stylish verve. He’s a deliberate man who prizes loyalty, talks straight, dislikes vulgarity and violence, except as a last resort (“Never ignore a man’s courtesy,” he tells Joseph). Guilt and altruism as cause-and-effect are also essential components, since each one plays into Sydney’s motives. Ultimately, conscience comes at a price, as does blissful ignorance.

Hall’s terse Sydney and Reilly’s devoted Joseph are both subtly fleshed out (Hall recurs often in Anderson’s later films). Jackson and Paltrow, though incidental figures, do their eccentric jobs well. Though Anderson went on to make a welter of spectacular films (“Magnolia,” “Boogie Nights,” “There Will Be Blood,” among them), none possess such genuine and heartfelt affection for character. Look for the young Philip Seymour Hoffman as a loud-mouthed, scene-stealing craps player.