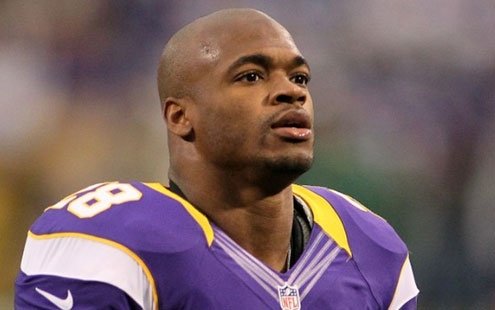 Several American football stars, including Minnesota running back Adrian Peterson, above, and Baltimore's Ray Rice, have been suspended, one for child abuse, the other for punching his wife.
T

hese days American sports stories can read like Depression-era fiction in which physical and psychological abuse was the norm and gangsters swore by boxing. In the 1920s and 30s, boxing was a fixture in the country’s blue-collar landscape and rivaled baseball as the preeminent sport. Fights reflected the best and worst of a deeply male ethos insensitive to sensitivity.

Fighters were often barely literate gladiators trained by grizzled gym rats and managed by pimp-like promoters. The loutishness gave the whole a kind of thrilling baseness. Here were downtrodden men given a shot at redemptive glory based on vicious skills. Their behavior outside the ring was irrelevant to the public myth and the press willingly turned a blind eye.

Until team sports gained a fuller foothold, competitive boxing was the accepted form of male social catharsis. But as mass media developed in lockstep with middle class values, gender equality with it, prizefighting began to lose its luster. Sound bite king Muhammad Ali revived it briefly, followed by bad-boy Mike Tyson, but by the time Tyson went to jail the sport was all but washed up as national entertainment. Middle class values scorned it.

Professional football, ironically the most violent team sport in history, fit into those values by seeming like at first more like a gentleman’s sport. Early football was celebrated at the university level (Stanford, Columbia, Harvard) and imbued with educated symbolism. “Gridiron” players took advice from tough coaches who willed them to success. After college, these men, girded by their experiences, were expected to meet the demands of the American social contract. Byron White, known as “Whizzer White,” played for the University of Colorado and the Detroit Lions before going on to serve on the U.S. Supreme Court for 30 years.

Now, football is what boxing was to those earlier decades, an organized fight club that boasts gargantuan men trained to go at each other at close quarters like locomotives. Its team aspect and its labeling as a “family sport” obscures how it copies the combat that boxing glorified.

Second millennium American football is a school for skilled ruffians bred to run fast, hit hard, and bask in the celebrity status that comes with doing these things well. If boxers were outsiders used by a system that admired their rawness, football players are raw millionaires who work within a system that spins them, often misleadingly, into the role models civil society desperately needs to rationalize its craving for violence.

During the boxing decades, social expectations were low and press intrusions few. But scrutiny and voyeurism are sports unto themselves. The privacy-busting 21st-century has canceled the buffering that adulation once ensured. Successful marketing now depends on gladiators sticking to the totems of social responsibility.

This leap into visibility and the righteous potpourri of emotions it elicits can suddenly undo meat-eating warriors who never though to tame their excesses before stepping onto the national stage. Some come from violent backgrounds. Others saw the manifestation of brawn as a social skill. Still others were so immersed in the ferocity of the sport itself that a similar ferocity carried over into daily life, or vice versa. Few of these men are preternaturally mean, but they are takers, not givers, and expressive through physical acts, not words.

But this once-noble, testosterone-generated aggression is increasingly under siege in a gender-sensitive society beholden to breaking concepts such as anger management, awareness training and zero tolerance.

Players who for years made headlines for assault, abuse and even animal cruelty — some suspended and even jailed — are watching, in part bewildered, as the bottom fall out on an established double-standard. The effort to eradicate domestic violence is butting up against public love for a game all know is nourished in part by physical hostility. Though fans have long lined up to watch football’s concussive spectacle, they now appear to want its trench warfare practitioners to exercise greater moderation and restraint and moderation in their (highly visible) private lives. This is a walk down Paradox Boulevard that boxing never had to take.

Europe and South America are less affected, since its own version of football is more benign. Its worst violence confined to angry fans prone to rage by losses or opposing fans. As for domestic abuse, many Latin societies are still sufficiently male managed that incidents go unreported.

American football is a sport unto itself. It exists and thrives based on physical aggression that lasts on-and-off for three hours. It is as extreme as a sport can get without being labeled as extreme. Yet it maintains its family billing.

How then to reconcile a warrior culture promoted by a hero-friendly vending machine with the egalitarian pressures of social decency? How to tame unstoppable force vs. immovable object so that it has no off-the-field aftereffects? Publicizing player transgressions, like exposing the infidelities of politicians, will no doubt increase in popularity. The public appetite for gladiators and their doings remains as intense as the fascination with pornographic fantasies. And both have so far eluded the sanest of measures intended to tame their hormones.