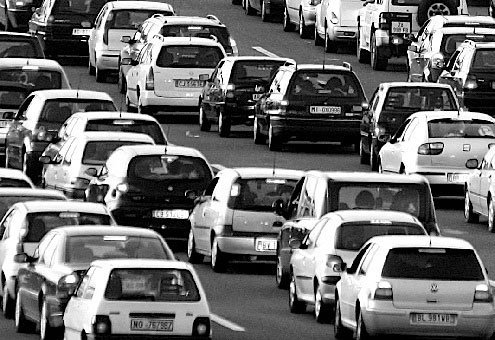 Italy's iconic summer photograph is a shot of cars backed up on autostrade as they come home: the rientro.
I

n both the United States and Italy, one of summer’s fixtures is the corny front-page photograph. America’s features children playing in a sprinkler — “Summer Heat Hits Anytown U.S.A.!” — or a man’s wrinkled face, complete with VFW hat and blurred stars and stripes in the background. Italy’s iconic summer photograph is of a topless showgirl (often satisfyingly chubbier in real life) or an aerial shot of cars backed up on autostrade as they come home or “re-enter” cities: the rientro.

When I arrived in Italy almost 20 years ago, some post-war boom Italietta glow still lingered around the latter. “Look,” its caption almost gushed, “just a few decades ago we were an agricultural nation too poor for vacations or cars. Now, thanks to hard work and ingenuity we are choking on the fruits of Western capitalism.” During two decades, the boosterish tone has mellowed, but the celebration of a nationally-shared ritual has not.

Rigorously taken in August, the Italian — continental really — vacation unifies in ways that the American one never does. True, there are American archetypes such as the family in a hot car with drooling dog doing the National Parks. But no American paradigm is as universal as the Ferragosto climax and the shared sensations and rituals of mare or montagna. Although locales are increasingly exotic, habits die hard; does anyone besides Italians consider the Caribbean a serious summer destination? Italian newspapers annually decry the disparities in prices for ombrelloni. But whether observed at Forte dei Marmi or Rimini, August’s rites and irritations are the same: vendors hawking counterfeit designer bags, ice cream and coconut, jelly-fish stings, lost children and obnoxious neighbors.

There is a classless democracy to Italian vacations that America should envy. Along with satanic mills and Marxism, the August vacation is a product of the Industrial Revolution. I can’t think of any American tradition that recognizes so effectively how interdependent industrialists and laborers are. Was it bosses fleeing heat who closed factories or workers whose inefficiency and suffering made closing worthwhile? America’s official summer is delimited by Memorial and Labor Days, which also mark the season for white dinner jackets, two-tone shoes and straw boaters; not really proletariat concerns.

Some economist somewhere has certainly calculated the merits of America’s three months slowed by general lassitude and staggered two-week absences relative to Europe’s four weeks of almost total shutdown. Last summer I heard a program on National Public Radio about this. An economist said that the American practice was not an imposition by greedy industrialists, but the choice of workers. American workers prefer higher wages to more free time. (And just how do they express this preference?) I do not have the program’s transcript, but do remember that the speaker was a Nobel prize winner and MIT professor, which narrows it down to Lester Thurow or Paul Samuelson, both reasonably credible.

Regardless of economic theory, a national vacation has many advantages. I like how it synchronizes everyone on the same, what I call “true,” calendar. A true calendar taps atavistic rhythms, following agricultural and seasonal cycles. My true calendar — still academic after all these years — is like the Babylonian one, which began with the harvest, the end of one productive cycle and the beginning of another. The August vacation may be an industrial necessity; the school calendar is an agricultural one, which freed children to work on family farms. Unbearable in a factory, August is indispensable on a farm. In Italy, industrial, agricultural and academic cycles coincide, uniting us all.

The rientro is a favorite of mine. As hot as June’s, September’s heat feels depleted and hopeful. Shuttered shops seem to waken, stretch and shake off the dust. In America, “back to school” is a commercial opportunity to stuff mail-boxes with offers for luridly-colored meat and twelve-packs of pencils. In Italy it is a uniting ritual. Like other unifying moments — the World Cup or major disasters — the rientro encourages personal confidences unspeakable during the other eleven months. Your butcher is actually a world-class mountaineer, your baker has a secret passion for Scandinavia, the dry cleaner almost murdered his inlaws. Asking everyone about his vacation and sighing over real life’s resumption are obligatory courtesies.

When I came to Italy I married into a Jewish family. Although I knew the Jewish new year fell in the fall, its full significance had never struck me. Like the Babylonian calendar behind it, the Jewish one begins with the harvest.

Now in my life it all comes together. With the rientro, school starts, work renews and the religious year begins. I always found January New Year’s resolutions negative. Taken in an anticlimactic moment, they highlight bad habits: I will eat less, drink less… Rientro ones are positive; back in my real life, I will do more, be better.

Shanà Tovah — Happy New Year — to you all.