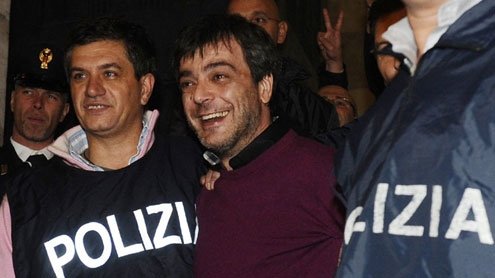 nglo-Saxon detentions are a celebration of the punitive. Arrested men and women stand pokerfaced beside similarly pokerfaced agents. Grins are a firing offense.

All the more reason to pause on images of captured on-the-lam Camorra boss Antonio Iovine.

Premise: Iovine is a conscientiously hateful man who helped run a correspondingly despicable organization. Calling him a bully doesn’t cut it. He was convicted and sentenced to life in prison in absentia for criminal association and murder, to which you can add extortion, drug trafficking, illegal toxic waste disposal and abetting prostitution.

Like many other Italian underworld figures, he’d been in plain-sight hiding in and around Naples for more than a decade. Testosterone and loyalty are joined at the hip in the male stalls of the Latin world; just ask Silvio Berlusconi.

That said, here was the youthful-looking Iovine finally in police custody in images beamed round the world. So, what did he do? He smiled. No, he grinned. Along with the police around him. Everything about his arrest looked like a pep rally. The only thing Iovine didn’t say was the Italian equivalent of “It’s all good.”

Fair enough, police were just as thrilled to get him as he might have been amused to finally be gotten. But the images remain surreal. Arrested Mafia chiefs Toto Riina (1993) and Bernardo Provenzano (2006) limited their mirth. Though Provenzano smiled — he’d eluded capture for 43 years — arresting officers didn’t. Most wore hoods.

There’s reason to suspect Iovine’s defiant cheerfulness wasn’t casual, and that’s not good news. The downfall of individual underworld overlords rarely puts much of a crimp in an underworld network that’s so entrenched and silently functional it transcends hyped breakthroughs. Caught bosses know this.

While Interior Minister Roberto Maroni called Iovine’s arrest “the anti-Mafia of facts,” the frantic need to emphasize “fact” had the ironic effect of evidencing the amount of hot air that still circulates in the cramped spaces between white-collar politics and multicolored crime.

Author Roberto Saviano, still under police protection for having lambasted the Camorra in his screed-like indictment “Gomorra,” was another smiler, though for different reasons. Iovine was a different breed of mobster, a businessman criminal capable of moving tens of millions of euro and directing traffic throughout the country and outside it. Undermine “rich” criminals, he said, and the beast feels the pain.

At the same time, the Iovine hurrahs coincidentally coincided with the end of a trial whose conclusion produced another take on Italian facts, namely none. Five men charged with detonating a bomb in the Italian city of Brescia — eight died and more than 100 were injured — were acquitted because according to judges the proof was either “missing, insufficient or contradictory,” the most demoralizing of Italian escape-hatch troikas.

Missing, insufficient or contradictory nearly 40 years after the May 28, 1974 massacre, which occurred at height of Italy’s left vs. right “leaden years.” The Brescia massacre is only one of a number of unsolved terrorists crimes from that period.

Though the Iovine arrest has no specific alleles in common with the Brescia verdict, it’s not hard to guess why some still struggle to take the Italian jurisprudence seriously. Even Berlusconi has dissembled and legislated his way through a variety of unsavory charges. He, like Iovine, enjoys grinning.

The dilemma, at least in part, is that law and enforcement are still sleep in separate bedrooms. While belief in law is sincere, enforcement remains haphazard, and as a result thought of as a whimsical adjunct of influence and power. Punishment is never absolute and the sentence scrawled beneath the Italian bench (“the law is equal for all”) is universally considered a utopian joke.

While the grinning Iovine may lose his grin in jail, there’s no reason to assume others won’t smile on his stead.

Unlike terrorist suspects who fled Italy, Iovine repudiated exile. Hidden by loyalists, a partisan in reverse, he stayed home and managed to dodge capture for 14 years. The Naples police chief said it best, admiration as a subtext: “He never left his territory. A real boss never leaves his territory.”

It’s that kind of statement that makes the larger rub red and itchy. Italy is still very much about bosses, whether in crime or in politics. And the real ones only never leave, they never fail to put on a happy face.