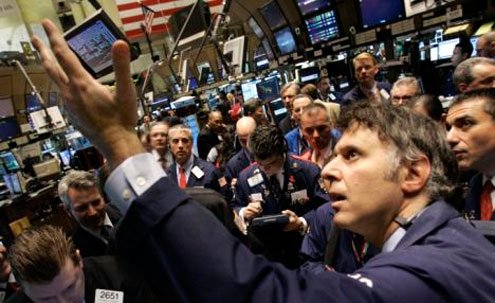 omer and Shakespeare rightly situated high drama in the precincts of envy, greed and melancholy. Odysseus was a spoiled warrior amid yes-men and Hamlet an angst-ridden prince at the mercy of mood swings. Their soliloquies and temper tantrums unsettled families, minions and states.

But the two writers also valued climax and denouement. If moping and hysterics went on indefinitely, plays and poems turn absurd. When Odysseus gets past his girl-trouble, Troy’s in big trouble. After the prince of Denmark rants, raves and recovers, false alarms dissolve and the dye is cast. Much to audience relief.

On and off since 2008, lately with new ferocity, economic sages of every stripe have reacted to stock market jitters with rehashed warnings and cautions as if unaware that too much climax produces anti-climax, which yields cliché.

No matter: Negative exaltation has turned volatile markets into user-friendly Richter Scales capable of aggregating, hosting and passing along every kind of social malaise. Normalcy becomes panic in the wings and the arrival of bad news suitably compounded and disseminated until slightly better news arrives to correct it.

But falling numbers made into five-alarm blazes come with boy-who-cried-wolf consequences. Lovers of breaking news grow calluses when calamity settles into a loop. Pseudo-panic in Europe begets the same New York and Asia, which then recedes tide-like until the next wave.

These repetitions whet an appetite for emotional lurches that mass media ranks high on its pod-quenching thrill list. There’s no cathartic sack of Troy or endgame family massacre. Just the prospect of more rehashed anxiety.

Speaking in Washington, Christine Lagarde, the newly-appointed chief of the International Monetary Fund, recently tied economic recovery to “collective international action” in an unglamorous speech aimed mostly at banks, businesses and finance ministries, the longtime custodians of big money and big debt. “There is a path and we have options,” she said.

Lacking portent, a “better” line was broadcast: “There are dark clouds over Europe and there is huge uncertainty in the U.S. And with that we could risk a collapse in global demand.”

Translation: the fearful West has stopped spending as it did in the 1990s, putting pressure on institutions that for decades put self-interest and greed ahead of debt.

Rarely noted is that public reluctance to spend is a direct result of the on-again, off-again alarmism that psychologically reinforces consumer helplessness. In this scenario, Odysseus knows only to mope, Hamlet only to rant, both indefinitely parked in their separate woes. The audience awaits a dramatic breakthrough that no one feels responsible for helping to generating. No one leaves the theater.

Stockbrokers have long been among the world’s most readymade alarmists, ready at a moment’s notice to inject doubt with urgency and dread. Mood-swing markets are the rollercoaster stars of what economist Paul Krugman calls “a financial system gone very, very wrong.”

Downward spirals are now macabre entertainment, with sell-offs and recoveries the centerpieces of a soap opera scripted with recurring plunges and recoveries. But this very emphasis on swings makes it increasingly difficult to reclaim the faith of a wary middle-class public, whose standoffishness contributes to the underlying problem. The vortex of agitated numbers compels in the same way as an oncoming hurricane, its surges and rushes reinforcing an unconscious addiction to fretfulness.

Less than half-a-century ago, a sudden five point market swing brought the West to thoughtful standstill. Now such falls are the backbone of an economic showtime aroused by its own bad tidings and apparently unable to stop selling tickets to reckless self.