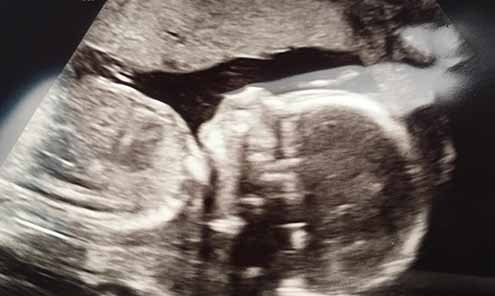 From vision to reality…
I

found out I was pregnant on my 41st birthday. It didn’t take a pregnancy test or go to a doctor. I just knew. But there’s a reason.

In late May, I was at a meditation retreat in Washington, D.C. I’d arrived late the night before after a thunderstorm re-routed my flight to Baltimore. We sat out the showers for two hours before flying back to Washington. By the time I got to the retreat, all the spots in the meditation hall were taken — except one in the front row directly in front of a big picture of the guru and a pot of yellow roses.

On May 26th, my birthday morning, I sat on that spot. While meditating, I had a vision of something in my uterus. My maternal aunt, who has been like a mother to me since my own mother died nine years ago, reassured me all would be well. Though the vision seemed like a pregnancy premonition, the teacher had told us not to attach too much importance to thoughts during meditation.

A week after the retreat, I went to dinner with a friend. I’d been feeling unwell all week with a sore throat and a weak appetite. But that night I was ravenous. On my own, I devoured black bean quinoa fritters and shrimp with Cuban bread — a meal I normally share with my companion, David. “I ate for two tonight!” I wrote him in a text, thinking only that I’d regained my appetite.

That weekend I felt strange: hormonal, tired, and slightly nauseous. “You don’t think I’m pregnant, do you?” I asked David. He felt my stomach but didn’t say a word. He did advise a test. Still, I waited. The odds of my being pregnant were too low, I told myself — statistically less than five percent for women of my age.

I’d frozen eggs in my late 30s precisely because I thought I wouldn’t get around to natural conception. “You’re an egg-producing overachiever,” the doctor told me after I produced 23 eggs on the first round (the average is six-to-12).

I suddenly felt that I’d gotten my whole life wrong. I jokingly tell people that I have sister lives, one as an Italian mamma with six kids, the other as a neurosurgeon. I won’t be either, but I carry a bit of both. I also should have known that if I was abundantly fertile three years ago, I was probably still fertile now.

I got the test Monday afternoon, and waited until the next morning to take it. I dutifully peed on the stick and came back two minutes later, squinting once it was in view — as if wanting, but not wanting to know. A miniature-looking flag of Finland stared up at me. It was positive.

Oh my, I said, returning to bed and curling into a little fetal ball. I was overcome by joy, fear, and shock. I’d wanted a child for a long time, but it was a desire I’d put on hold to focus on other aspirations. David and I still led separate lives. We’d talked about merging them and one day having a child, but nature had beaten us to our imagined finish line.

At the end of the week I heard the fetal heartbeat for the first time. “Some people start to cry when they hear that,” the nurse gushed. I sat staring at the image on the ultra-sound, no bigger than a cricket, stunned and stoic. I was creating a creature — one that might crack me out of the small shell of myself.

“Pregnancy is a really good way to get over yourself,” I told my doctor. I’m forcibly getting over some hard-wired phobias. Like that of nausea and vomiting. As a child, my older brother’s retching traumatized me. He was more out and about than I was and intestinal flu seemed to like him. I’d hibernate in my upstairs bedroom as he took over the downstairs family room and adjacent bathroom. I imagined my mother with him in her Pepto Bismol colored robe, holding his head, doing what mothers do. After a few seconds, I covered my ears: I wanted to know pain, but not feel it.

Now I’m a pro at vomiting. The first few times were tough. What calmed and loosened me was the voice of my guru in my head saying, “Relax the body.” In other words: Surrender everything. You have nothing to lose. And maybe a whole lot to gain.