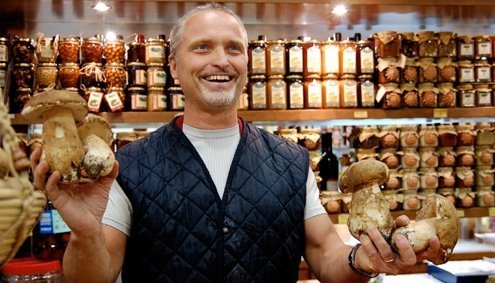 Stefano Conti is the third generation of his family to sell foods at Florence's central market.
I

n my trips through Italy I’m constantly struck by how recipes don’t travel. Mugello, a hilly place above Florence, produces potatoes that are essential for a ravioli called tortelli di patate. Can I get it in Florence? No. I have to leave the city and head for the hills. Some Florence pasta shops do sell tortelli, but they’re unlike the real thing.

Italy has 20 regions. Each has provinces that are divided into comuni (8,000 plus) and sub-grouped into municipalities. Now, multiply the total by how many housewives and chefs cook the same recipes daily and you’ll get a vague idea of the possible number of variations on a single recipe.

Specialties are often the product of artisans who make very little of the product — a central dilemma in trying to find dishes far from their birthplace.

In 1996, Burton Anderson wrote a book called “Treasures of the Italian Table: Italy’s Celebrated Foods and the Artisans Who Make Them.” Anderson sought out the artisans to try to identify the source of their passions. He interviewed white truffle harvesters in Alba, makers of saltless bread in Tuscany, even Neapolitan coffee makers. Time and again, in work and lifestyle, Anderson witnessed quality over quantity.

When I moved to Florence in 1984, there were only Florentine restaurants (and two Chinese). Things have changed. There are Napolitano, Calabrese, and Sardinian places. In the San Lorenzo Market, I can buy regional ingredients such as ‘nduja and other Calabrian chili products. This finally brings the familiar back to those who had to leave their home and look for work elsewhere. It also enriches the palate of locals.

At a recent culinary conference in New Orleans, speakers focused on connecting food to producer. Italian farmers markets make this easy. But with the spread of supermarkets and fast food, the artisans and farmers behind the markets are endandered.

In New Orleans, author David Mas Masumoto (“Epitaph of a Peach”) asked his listeners to list the 10 foods they wanted to consume before dying. I couldn’t do it. I didn’t have specifics. I could think only of places. Turkey, Morocco and Egypt all produce spicy food flavors I’d like to taste. Place matters to me.

I wouldn’t care if I ever ate another bowl of spaghetti all’amatriciana. What I would like is to eat it in Matrice, that dish’s home. That would help me not only to understand its making but to engage traditionalists over whether to add tomato (remember, tomatoes were brought to Italy in the 17th century). It would also help me leap headlong into the onion argument (yes or no). It’s Matrice more than the food that requires the visitation.

That’s why food distribution, ensuring that specialties actually move around country, is so essential. So is sustaining and nourishing the consumer link to the makers of products.

The town of Montevarchi outside of Florence recently opened a test market called Mercatale in an effort to give artisans and farmers a space to showcase their goods monthly. The idea was also promoted in Turin at the Salone del Gusto. The idea was to create a prototype market that would allow producers to sell directly to clients, cutting out the middleman, lowering breaks, and giving consumers and sellers incentives. These are the kinds of ideas necessary to sustain markets.

Markets are also good for residents and culinary tourists alike. They open a treasure chest of goodies. Searching out local specialties has became a new travel trend. There are guide books for gastronomic holidays. Staying at a local agritourismo, where food is produced inhouse, has increased in popularity over the last decade or so.

My choices have expanded as a result of opening a direct channel to the producer. At my central market I now taste the offerings and ask questions. When I shop at Alimentari Baroni, my cheese choices include cow, goat, sheep and water buffalo (from Italy, France, England and Spain). I buy Tillo’s sheep’s milk cheeses and Giampaolo’s four-year-old Parmigiano Reserva. Often owner Alessandro Baroni has me taste a new cheese and lets me know how to best serve it. Maybe he’ll mention a jelly or a honey drizzling, or even an artisanal beer that helps bring out nuances in the cheese.

I buy my olive oil from vegetable vendor Stefano Conti. His uncle produces it on a farm 30 minutes south of Florence. Otherwise I go to Nadia, the woman who used to live in my house in the countryside who has an olive oil press.

I buy Sicilian sea salt from a Trapani cooperative. It’s basically 10 men with wheel barrels and windmills near a natural park called Mothyia. Sun and wind create the simple salt crystals that help raise the quality of my food.

Choosing prosciutto requires its own precision. What region am I looking in — is it Tuscany, Umbria or Parma? Do I want San Daniele or San Ilaria? They’re not the same. Each hill where the ham is cured reacts differently to wind and the air, gently altering texture and flavor.

I scour countryside markets. On Saturday, I buy my fresh vegetables from Francesca, my village farmer in Certaldo whose family moved from Sicily. She breaks my Tuscan monotony with her rich Sicilian recipes.

Vendors are my masters. They link food, history, and culture. They thankfully ensure that a culinary lifeline is maintained and preserved. Here’s one of Francesca’s recipes.

— Pila Vecia rice-maker Gabrielle Ferron of Isola della Scala (near Verona) taught me fabulous non-stir risotto thanks to his tender rice. I applied it to Francesca’s spoken recipe and shopping list.

Extra water at the end if needed.

Clean the leeks and finely slice. Place in pot with extra virgin olive oil, enough to cover the bottom of the pot. Cut the pumpkin into small cubes and let cook with the leek. Salt to taste and sprinkle with chili flakes.

When the leeks are caramelized and the pumpkin tender, about 10 minutes, adds the rice.

Stir to mix well and ‘toast’ the rice.

It should be covered in oil and hot. (Each grain shiny, not swimming in oil)

Salt to taste. (I use water instead of bouillon cubes. There’s enough flavor with veggies, olive oil and sea salt)

Cover and let cook for 14 minutes. Uncover and stir. The rice should be cooked and the liquid absorbed.