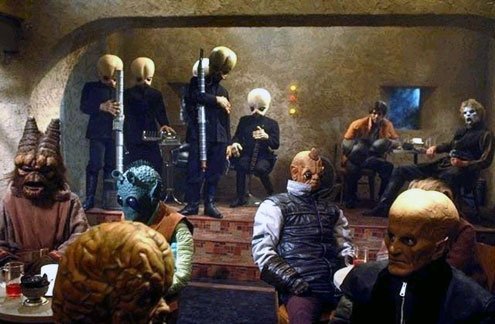 China is no stranger to the world cantina and its non-linear players.
T

he irony of global communication in a U.S. presidential election year is how it cajoles American domestic headlines into universal ones. Western media dissect debate squabbles as if there’s no greater celebrity than the American president. It’s a myth (or freedom cheering, depending on your viewpoint) to which the Cold War paid lip service and mass media remains addicted.

In Florida, two men yowled about the fate of a political planet over which they, and their America, has increasingly less control, which is in the order of change. Yet, to its peculiar credit, the U.S. remains ethnocentrically loyal to itself and its visions. It is, to its citizens and image-makers, either “special,” “exceptional” or “unique,” perhaps all three; traits that while not necessarily virtuous are certainly self-assured.

So, here were the two presidential candidates debating American foreign policy, talking superficially about China, Iran, the Middle East, plowing ahead with verbal theatrics largely removed from the inner jiggering of a planetary landscape that few Americans really know much about.

China, too, is holding an election, also in November, but its results are preordained and the voting in secret. No one debates anyone, at least not in public. Policy is not up for discussion. It is handled by hushed and discreet authoritarians focused on foreign policy as a way to fortify the domestic whole, undeterred by criticism and often astride international law.

As the most powerful of the BRICS nation bloc (Brazil, Russia, India, China and South Africa) and the most gifted with financial reserves, Beijing is pressing ahead with what amounts to a 21st century colonization effort that puts money (and workers) ahead of gunboats, in essence shaping the future without making news.

Read between the lines and you’ll find the future’s news, namely Chinese currency, dollars and Yuan in the tens of billions, running not only into Europe and the U.S. (the only time it raises Western hackles) but more importantly into Africa, south Asia, the Balkans. Though hindered by recession-era slowdowns, China is nonetheless investing in the world in a way no country has ever done previously.

As if building on the Marshall Plan, it is spending great loaves of cash to support infrastructure in Nigeria, Chad, and Ghana (the list goes on); it is bailing out EU-bound Croatia (the IMF won’t); it is setting up wind power in Romania and car factories in Bulgaria, to create a dependency it then feeds.

It’s a no-nonsense Han Solo self-schooled in operating in the newly minted global free market with its assortment of “Star Wars” cantina players. From Africa it’s siphoning raw and precious materials, an old colonial marker; from eastern and central Europe and the Balkans it’s attempting to open further byways into the West. From Central Asia, long coveted by Russia, it is building pipelines for natural gas and oil. China is hungry and needs to feed.

In a “normal” democratic state, or so goes one refrain, the monies China is spending to plant itself overseas would instead be invested domestically, on health care, education, and worker safety, all of which require desperate repair and upgrade. By indefinitely ignoring national complaints, China risks seeing fed up Industrial Revolution workers rise up and rout their bosses, both locally and nationally. Maybe.

But for now, the Chinese are buying time, and spending. Unlike the self-involved sultans of Arab oil states who dress in Armani and fondle London escorts, Beijing’s staid leadership focuses most of its near-puritanical energy on where and how its interests can be best rewarded. Of the self-made “exceptional” three, the U.S., China, and Russia, China is now the one with the least bluster and the greatest reach.

Why does this matter? After all, Beijing’s investments are common knowledge, and few of them are openly illegal.

Maybe because as media lenses dwell for hours on presidential candidates arguing over foreign policy on what’s billed as a galactic platform it’s worth remembering that most of the world is in fact not on that platform, or even in the provenance of the United States and Europe.

It’s a planet of hinterlands, in which supremacy is based on money and amorality, on less-than-elegant understandings, on religious shadings and adjustable positions American candidates won’t discuss, let alone know to fathom. Much to undistracted, debate-less China’s patient advantage.