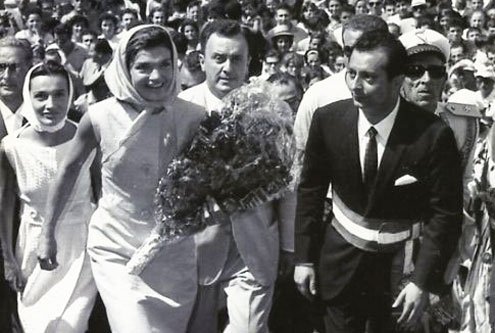 Jackie mesmerized Ravello and its officials, with her sister Lee in tow.
M

ore than half-a-century ago, one American woman’s celebrity peaked in southern Italy. She was Jackie Kennedy, wife of U.S. President John F. Kennedy, and in the summer of 1962 she embarked on an informal Amalfi Coast holiday with her four-year-old daughter Caroline.

Long before traveling to Italy, the First Lady was a global phenomenon. Jackie Kennedy — later to become Jacqueline Kennedy Onassis —had a lifelong knack for captivating the public imagination. Elegant, fashionable, and constantly in demand, the relentlessly-photographed Jackie was seen by some Europeans as the closest America had ever come to producing a stylish female aristocrat.

Daughter of a successful Wall Street stockbroker, Jacqueline Bouvier had an educational and social pedigree. She spent much of her youth in elite East Coast private schools, working her way up the social ladder. She married then-congressman Kennedy in 1953, and became First Lady when Democrat JFK won White House in 1960. Their union gave the presidency new luster. The heyday ended suddenly and tragically with Kennedy’s 1963 assassination. Five years later, she wed Greek shipping magnate Aristotle Onassis, becoming known as Jackie O. Until her death in May 1994, she and her children — both by Kennedy — were seen as American royalty (her media darling son John was killed in a1999 small plane crash, an event that also shocked the country.)

But Jackie’s popularity may have reached a tipping point during that three-week stay on the Amalfi Coast, billed as a private holiday. Traveling first class on Pan American from Idlewild Airport (soon renamed in honor of her husband), she touched in Rome with Caroline, her assistant Providencia “Provi” Paredes, and Clint Hill, her personal Secret Service agent. The group then boarded a charter to Salerno, where Jackie’s younger sister Lee Radziwill greeted them with her husband, Polish Prince Stanislaw Albrecht Radziwill, known as “Stas.” A few Secret Service agents awaited them in Salerno, but there was no sign of the paparazzi or press. Yet.

Chaos ensued when the visitors arrived in hilltop Ravello, where a welcome festival was already in full swing. Huge “Welcome Jacqueline” banners decorated the storefronts with townspeople and tourists jamming the streets. Jackie met the mayor and was entertained by a troupe of local children dancing to live music in the town’s Piazza Vescovado. Agent Hill guessed there were some 80 photographers snapping away, many breaking through security cordons to get closer.

The unofficial nature of the trip made privacy an ongoing challenge. The Radziwills had arranged for the group to stay at Palazzo Episcopolo, a villa among lemon and orange groves that had once served as the summer residence of Italy’s King Vittorio Emanule III. They would also have access to a cottage closer to the beach at Conca dei Marini.

The 33-year-old Jackie was irresistibly out of place in Amalfi. Her chestnut coif, aristocratic airs, Chanel suits, and Oleg Cassini gowns were transformed into wet locks, sun-drenched skin and one-piece swimsuits with plunging backs (which she wore while waterskiing in the Bay of Salerno). Eager to capture the First Lady’s casual side, shoreline photographers hung from villa balconies and zipped around in motorboats. The experience was a far cry from Jackie’s only previous Amalfi trip, when she was an unknown debutante taking a break from studying at the Sorbonne in Paris.

Soon, the Secret Service figured out why the photographers seemed so especially aggressive. Benno Graziani, a Paris Match photographer and an old friend of Jackie’s from her brief stint as a photojournalist for The Washington Times-Herald, seemed to have carte blanche access to the First Lady. While the paparazzi were under strict orders to stay away from Jackie along the seashore, Graziani had no such limits. The Italians decided on payback.

Another Secret Service agent, Paul Rundle, eventually brokered a deal: Jackie would agree to pose for a full 10 minutes in exchange for the paparazzi calling off their photo hunt. But the truce was short-lived.

When Gianni Agnelli, Fiat’s dashing chairman, sailed his 82-foot yacht “Agneta” into the bay, inviting Jackie on board, the paparazzi went wild. Never mind that Agnelli’s wife Marella was also present, or that the Agnelli and Kennedy families were close (JFK had thrown a star-studded White House dinner for the Italian power couple the previous year). The press had another take: The queen of the Camelot myth and the king of the closest thing Italy had to a royal family were obviously having an affair.

“Reporters” dummied up their own proof, cropping pictures of Jackie and her friends so that the published photographs portrayed her as being alone with Agnelli. From afar, JFK recognized Agnelli’s presence as a PR nightmare. “More Caroline, Less Agnelli,” he cabled his wife.

But Agnelli would prove helpful, if only by chance. Hardly on the yacht, Agnelli offered Jackie the “Agneta, ” which she gladly accepted since being anchored in the middle of the sea shielded her from the prying eyes of the press. On it, she sailed to Paestum, where she impressed everyone with her command of ancient history, and to Capri, where she dined into the wee hours with the fashion designer Princess Irene Galitzine. Before the vacation ended on Aug. 31, the First Lady made sure to get in a solid night of clubbing in Positano.

Despite the incessant press intrusion, the Italian respite was a highlight of Jackie’s halcyon days. Photos show a resplendent, relaxed and authentic woman, a proud mother basking in the sunshine and reveling in the company of friends far from the gloomy world of Washington politics. In his touching 2012 memoir “Mrs. Kennedy and Me,” Agent Hill, who later famously hurled himself across the back of the presidential limousine when shots rang out in Dallas, sounds wistful. Jackie’s time in Amalfi, he wrote, “was a moment when she was carefree, enjoying life to its fullest.”