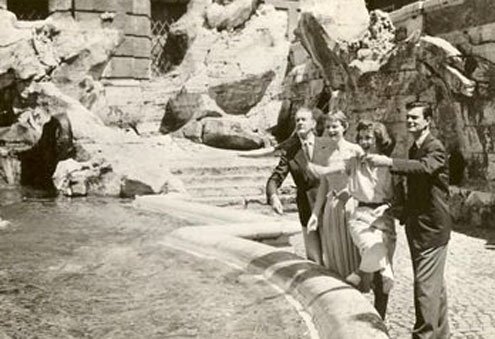 The 1954 American movie "Three Coins in the Fountain" put the Trevi Fountain on the U.S. pop culture map.
F

olklore says that if you toss a coin over your shoulder into Rome’s Trevi Fountain, you’re bound to return. I’ve never tossed any coins but I have managed to circle back to the city again and again. Despite its inherent flaws, Rome has held me in its thrall for more than a decade, first letting me go, then pulling me back in, only to let me go yet again.

The first time I left the city was in 2004, after a year spent living life intensely, precariously, and writing as if my life depended on it. For money, I got a job checking coats in a nightclub, where I met my partner Simon. I started and finished what might be called a novel — it had never occurred to me to start small, with short stories or essays. I might have blamed my bombastic inspiration, the American novelist Henry Miller, for my outsized ambition. Miller was intent on blowing the mid-20th-century literary world apart. He could be dictatorial at times. To follow in his spirit meant rigorously putting aside work (i.e. gainful employment) and make writing the primary focus. According to him, this dedication would allow me to bare myself in words, stripping me down to my essence.

I probably wouldn’t have survived that year without Simon. I surely would have gone hungry. But his support, encouragement, and dinner dates didn’t solve the problem of my material existence. So I packed my suitcases and shipped my books to Spain, to Seville, where my stepfather’s mother had an extra apartment that came with a daily free lunch.

I lived in Seville for six months — until I couldn’t take it anymore. I gave bargain English lessons and spent whole days writing. I finally reached the conclusion a lot of others have before me: writing is far harder than anyone thinks. I made no friends and very little money. I ate abuela‘s huge, well-boiled lunches: beans boiled in pork fat, boiled artichokes or limp spaghetti. I strolled for hours along Seville’s wide sidewalks and through its parks spotted with mothers and babies. Seville’s domed sky was always blue, even in winter. I remember only a few days of rain.

But there was no variety. My solitude filled the whole of empty days, which soon lapped over into weeks and months. For long stretches, the only conversation I knew was between characters on a printed page. If I’d stayed, I would have withdrawn into myself like a sweater turned inside out. Missing Simon, I returned to Rome in early spring 2005.

I already knew Rome offered no financial perks. Simon lived with his parents, who weren’t particularly happy to host a dreadlocked and broke twenty-something American women who seemed completely aimless. Though I’d figured out the two things that mattered most to me — writing and Simon — I still hadn’t worked out how just how to manage them.

Simon and I developed a plan. I would return to my Michigan hometown, where I could stay with my parents. He’d join me later and we’d travel cross-country. I’d just arrived from Spain but I was off again.

Two years later, after living with Simon in the U.S., we moved back to Rome yet again, this time flying from San Francisco together. My third stay has lasted more than seven years, and it’s been by far my most productive. I found a way to make money that agreed with me. I developed as a writer. With Simon, I learned the ins and outs of a relationship. Rome is now inextricably linked to all these things, to discoveries, lessons and mistakes — to life itself.

The time has now come for another departure, this one so I can begin to live my life around the themes that once baffled me. It’s time to trade Henry Miller’s severe instructions for the advice of university writers and teachers, an experience I interrupted more than a decade ago. Simon and I are headed for New York City and I can’t wait.

Leaving seems less painful this time around. That may be because of so many previous comings and goings. But it also may be because Rome has played its role and played it well. I’ve grown. Coin or no coin, I have a strong feeling that one day I’ll be back — perhaps with packed suitcases in tow.