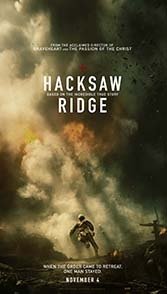 The cult of the ordinary hero has long been a central ingredient of American culture. In the Ronald Reagan years, the political right used it to lure white, working-class men into the Republican Party. The typical definition of ordinary hero excludes the military, but it applies to director Mel Gibson’s epic “Hacksaw Ridge” because its hero, Desmond Doss (a low-key and charismatic performance by Andrew Garfield) is a soft-spoken, geeky Army medic who — because he’s a Seventh Day Adventist — won’t carry a weapon.

Yet Doss will prove his many Army macho mockers wrong by single-handedly saving the lives of some 75 wounded soldiers stranded on the Maeda escarpment (Hacksaw Ridge) during the ferocious 1945 Battle of Okinawa. Gibson’s conservative values are stamped on the story throughout. Male bonding is paramount. Women are loving but stoic. Duty meets obligation and patriotism. Christianity and faith are fundamental to all. Combat, while gruesome, is ultimately worthwhile.

It takes a while to get to the combat scenes. Gibson picks up Doss as a boy in rural Virginia; introduces his alcoholic father (deftly portrayed by Hugo Weaving), a World War I veteran who suffers from survivor guilt. He finds Desmond a girlfriend and future wife (Teresa Palmer as Dorothy Schutte), who is a trifle too perfect — more a beatific vision than flesh-and-blood woman. In the process, we learn how Doss’ faith has led him to choose conscientious objector status. Boot camp — a series of torments for Doss, including a less-than-credible court martial — follows (“I am being treated like a criminal because I won’t kill.”)

Doss was a real person and a Medal of Honor winner who in fact saved the lives of dozens of wounded soldiers by lowering them down from the contested ridge. But Gibson takes liberties. The daunting sheer cliff seen in the movie — filmed in Australia — bears little resemblance to the real Maeda, a rocky slope that turned vertical only toward the top (the Army first used 50-foot ladders). Gibson also overdoes the flame-thrower — screaming, immolated soldiers appear frequently — perhaps to emphasize the battle’s apocalyptic, literally infernal side. He also lacks Clint Eastwood’s interest in the battlefield as seen from the other side (“Letters from Iwo Jima”); the wounded Japanese soldiers Doss lowers down the escarpment “didn’t make it,” a smirking G.I. tells Doss. There’s also a dose of mawkish religion: Doss inspiring the company through prayer or, Christ-like, with the clouds of heaven above him as the camera sweeps below his stretcher as he’s lowered from the ridge.

But hey, it’s Mel “Braveheart” Gibson, and God, country and violence run in his cinematic blood.