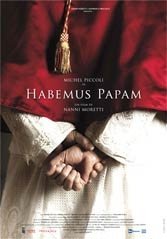 Little-known French Cardinal Melville (octogenerian Michel Piccoli), who like Pole Karol Wojtyla once aspired to acting, is elected pope by a divided conclave. Seconds before his formal introduction to the St. Peter’s Square throng, he suffers a nervous breakdown, letting out a primal scream — Non c’e la faccio (“I can’t handle it”) — before fleeing into back rooms. Nanni Moretti’s startling opening yields an intriguing scenario, namely a famous psychiatrist (Moretti) invited into the Vatican by locked-in cardinals in an effort to coax their shattered, humbled, and deeply unstable colleague from his funk.

What seems at first like a Church-mocking parody takes a wildly inventive twist when the new pope is snuck out of the Vatican to see yet another therapist, the Moratti’s character’s ex-wife (Margherita Buy). To her, Melville confides that he’s tired, world-weary, and suffering from a “psychic cold” that won’t go away.

But Melville does go away. He escapes his Vatican retinue and unbeknownst to the cardinals begins wandering the streets of Rome, attempting to take stock of what’s wrong. Thus the film forks in two, with sweetly sarcastic shrink Moretti entertaining and analyzing hypochondriac cardinals in the Vatican (and organizing an impossibly charming volleyball tournament), and the moody bewildered Melville riding local buses, meeting sales clerks, listening to street musicians, and indulging his love for Chekhov, all the while visibly cowed by the daunting babble of the human condition (“Why can’t I just disappear?”)

The amalgam of the parts, and Piccoli’s modest majesty, produces a deeply moving film about depression, humility, the limits of leadership, and the burdens of the office. It is without doubt Moretti’s most imaginative project in decades, and perhaps his best ever.