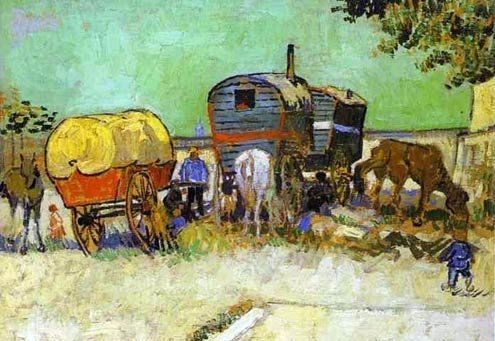 wouldn’t be telling the whole truth if I said I wasn’t a racist. We’re all slightly racist. That said, if I’m walking down a dark street, a white man makes me more leery than a black one. And if I happened to be wearing a short skirt on said street, I might just see a South American man hissing “Sssss… Mommy” as a predator.

My friend “roster” contains every race, religion color and creed (though I’m missing an Indian). To be honest, I’m partial to Jews and homosexuals. Maybe that’s racist.

Nothing says summer in Rome like gelato and gypsies. Gelaterias and gypsies are everywhere. When it’s hot, I sometimes have two a day — gelatos not gypsies.

One recent rainy morning, my five-year-old son Oedi and I jumped on a bus. In the back was gaggle of gypsy children, which my son immediately approached with smile.

I immediately pulled him past the group to middle. He wasn’t happy.

“But Mom I want to sit with those kids!”

Being the mother I am, I wanted to explain. Being the liberal I am, I stuttered.

“You cannot sit with them because they don’t speak English or Italian.” I hoped this would shut him up.

“Do they speak Spanish?” he asked, “Because I speak a little Spanish.”

“NO, they don’t speak French so they won’t understand you.”

“But I want to stay with them!”

Now he was upset. But the bus stopped and the Rom children filed out to start working over unsuspecting metro travelers. The awkward situation was then followed by questions.

I searched for the right explanation. And found a conundrum. I didn’t want to be racist, but the truth is the Rome’s wandering Rom is a breed apart. They can be trouble. Protecting my children comes ahead of a bleeding heart.

“Well, did you see how those kids were dirty?”

“Like Nico?” (His younger brother has a talent for being filthy right out of the tub.)

“Yes, like Nico.” I replied, almost confused as he was. “If you see kids who are dirty like your brother, and they’re in a group, you have to be very careful because they have dangerous parents.”

I felt like this was a nice compromise — putting the blame on the adults.

“Because they steal children.”

“They can’t steal me. I would kick and fight….”

He then elaborated a scheme to conquer the kid-stealers. He didn’t sound intimidated or scared.

I interrupted him to say that a group of them once stole my computer.

He stopped in his tracks and wore a disgusted look.

“You mean the white one? With the apple on it?” The very same.

Now he was outraged. “That’s terrible! Why would someone do that? Did they try to get the iPad also? Did the police arrest them?”

Suddenly I was worried about his lack of compassion for child trafficking and that he held technology in way too high esteem. So I tried steering the conversation to stranger danger.

“Sweetie, just stay away from these people. They are dangerous.”

“And also because we have iPhones.” Yes, that too.

Jump cut to yesterday. Oedi and were on a Metro platform on our way back from his favorite place in Italy: The American Embassy (not a joke — the kid is a patriot). A train approached and we jumped on. At the same time, an accordion player and his small son also got on. My son and I took our seats. The music followed and the child began a rather weak attempt at what one might consider soft shoe.

(Note to reader: I regularly start what I like to call “DANCE PARTY USA” in my living room. I turn up the tunes, shake my groove thing, and ask my kids to play along. They are immediately repulsed.)

But on the Metro my son lit up like a Christmas tree. “Mommy! Dancing! You love dancing!” Without pausing, he got up and joined the gypsy kid. Suddenly the two of them were dancing around a pole — but not like strippers. I was motionless, laughing nervously. “But… don’t… come… sit,” I muttered. The kid who won’t dance in his own home was now two-stepping for an entire commuter train.

The song finished and the train came to a halt. My kid’s dance partner made the rounds with his cup. And I heard my son say, “Mommy pay him! Give him some money! Someone finally got me to dance!”

But I didn’t “pay” him and explained why. “Those people,” I told him, “were like the kids on the bus whose parents stole my computer.”

“No Mommy,” he replied, “they were just people who like music and dancing.”

And maybe they were.

But motherhood is sometimes about gut instincts. And gut instincts can trump liberalism, at least when it’s your son.