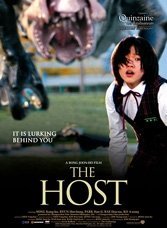 An American military laboratory scientist finds dusty bottles in the lab and orders his Korean lab assistant to empty their toxic contents down the drain. When the assistant protests, the boss replies, “the river’s big.” Big enough to give birth to an ungainly giant reptilian monster that splashes out of the river and onto land with his clumsy gait.

Most action revolves around the mildly retarded and sleepy Gang-du and family. His elderly father admits that while he was off gallivanting during his youth, he son probably suffered malnourishment.

Gang-du’s daughter, a bright, likeable student, notes that her aunt, Gung-Du’s sister, is an archery champion but gets the bronze rather than gold medal “because she takes too long to make decisions.”

When the monster first thumps on land near Gang-du’s food stall near the riverbank, mayhem breaks loose. It snatches Gang-du’s daughter and stashes her in his snack lair. Gang-du and family make a heroic attempt to retrieve her.

Director Joon-ho Bong’s film will appeal to fans of old science fiction flicks. His non-traditional casting works well. The offbeat cast is likeable, the kids don’t overplay their cuteness, and the aunt has another whack at a bull’s eye. Good sometimes triumphs over evil; other times not quite.