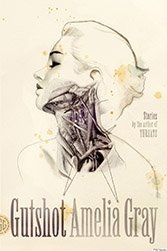 A couple hires a call girl and locks her into the ductwork of their home to give their relationship a kick. “It’s a special game to us…” A second couple, dealing with the awkwardness of a date, shimmy to and fro until their body parts start falling off, his dick in a bowl of soup, her nipples on the floor “like flies on a summer day.” Yet another couple, this one desperate for a baby, hatches a plan: she’ll cut off his penis and stitch it into her vagina with sewing needles. Then what? Who knows. But Gray isn’t finished with slice-and-dice, or couples. The narrator of “Fifty Ways to Eat Your Lover” is positively with love advice: “When he asks you to wear the dress he likes, slice off a slab of his buttocks and serve it to yourself on a plate.”

Girls will be girls of course, but reading Gray’s stories — there are 38 in the collection — can be like brushing your teeth with sandpaper while munching on a handful of razors. It’s not that her tales possess destinations in any traditional sense, since they often bypass conventional beginnings, middles, and ends. They feel instead like snippets of twisted anthropology as conveyed by an extraterrestrial pondering the bizarreness of humans while continue to probe both their behavior and artifacts.

Gray takes people in fairly normal circumstances and soaks them in psychological birth defects, the result revealing snapshots of gunk and goo. Stylish gunk and goo at that, since her prose is discreet enough to seem 19th-century-like, with more than a hint of Sunday School parables uniquely deformed to suit her ends (“Your heart is a wall of the same brick repeated.”) Bible stories, she has said, are among her favorite inspiration, which means those who seek shall find, whether a snake the size of a town or a chatty pimple with an attitude.

Gray’s distortions are effortless if not second nature. She takes to ooze like a towel (“…the road of excess leads to the palace of wisdom, and that road is paved with handjobs.”) Her better stories are alien dissections (“…bodies are mannequins carrying skin and clothing and color…”) while her more frustrating ones — many are a page long, so-called flash fiction — present surrealism for its own sake, like a one-and-done Disney World horror ride.

At one point a character says, “Empathy, I found, was a good a valuable skill and I tried to practice it at least once a day.” But trying isn’t enough. Not when curses arise to turn mothers into an army of ants.