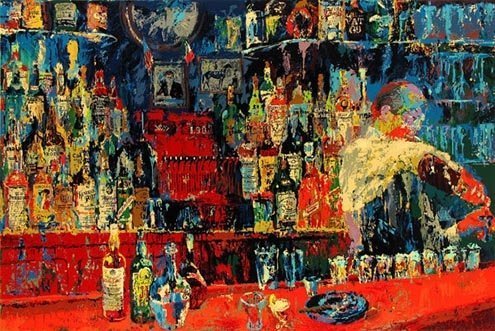 At the bar, the tone changes.
&

#8220;To be irreplaceable, you must be different.” • Fashion designer Coco Chanel

“He didn’t text me today. That fucking asshole. I need a cigarette and a drink. Wanna go get some food?”

I’d only just met my co-worker, and I didn’t know a soul in Fort Lauderdale. I was tired, hungry and her phone rant somehow caught my attention. I ignored the little warning flare in my gut.

Before she called, I’d planned on bringing food to the room. A book and the balcony would do the rest. But now I was changing course.

We agreed to meet in the lobby and walk to a waterfront restaurant.

“Great,” she said excitedly. “I’ll just throw on some clothes and meet you in 10.”

I changed into shorts, a light sweater, and sandals. I let my hair unravel from its bun and tangle down messily.

Twenty minutes later she sauntered out of the elevator. “Oh, hey, sorry I’m late but I totally had to change my make-up.” She announced this from across the hall.

One look at her and I felt completely under-dressed. Worse, I felt like a child in a modern-pod-toddler-swing, an insecure pre-teen made to stand by a buxom bombshell. She was a good five inches taller than me and at least six cups bigger.

She wore a strapless dress that hugged her tall body and narrow hips. The upper portion of the dress rested just above her nipples, allowing her ample surgically enhanced bosom to proudly present itself to the world. Her breasts didn’t bounce so much as jerk forward awkwardly. I wondered how her jersey knit dress didn’t slip off the top of her nipples.

Her hair was smoothed back and her small handbag matched the grey of the dress. Add the grey eye shadow and large silver hoop earrings and she was the complete Florida package. The only part that wasn’t right were the cheap rubber flip-flops, a choice I didn’t understand.

At the restaurant I went for a nice waterfront table, but she pulled me away to the bar. It was more like squeezing than sitting.

It didn’t take long for the male adoration to kick in, but she still had her AWOL man on her mind. “I don’t understand. I mean, we’ve been seeing each other for three weeks and all of a sudden he doesn’t fucking text? I know his company isn’t doing great but what the fuck? It’s Friday and he hasn’t even reached out. I think he’s just really stressed. I know he still talks to his ex-girlfriend. I want to not care, but I hate this. Want a cigarette?” She begged me to tell her what I’d do in her shoes, hard to take seriously between her tequila shots, giggles and selfies.

“I don’t know,” I told her. “I do think when a guy is into you you’re the bright spot in his day. He wants to talk to you. But hey, it’s only been a day. So don’t worry. Maybe he’s caught up at work.”

She opened her phone screen to check if he’d written. Bars are no place for privacy. There were messages from at least 10 guys filling her text inbox. It seemed she had no shortage of admirers, only that the only she wanted to hear from wasn’t playing along.

But it never came.

She just slowly turned away from me, ordered another shot, and slung her arm around the commercial airline pilot nestled beside her. He’d been busy taking cleavage-heavy selfies of the two of them all night. He flirted. She flirted back.

And her spirits were lifted.

All was back to “normal.”

What did I learn by the end of the evening? To always listen to my gut.