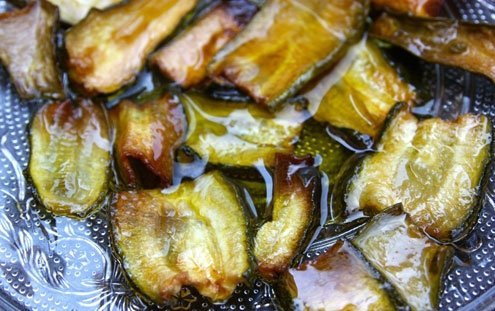 Zucchini concia is ancient Rome Jewish preparation made from fried zucchini marinated for a day in vinegar, garlic and basil.
O

n a winter Sunday, I meet my friend Alberto Sonnino at the Forno Boccione bakery in Rome’s Jewish Ghetto. I work with Alberto, but getting together for pleasure is another story. He knows I love to cook, and today he’s invited me to an event called “Gusto Kocher,” or Kosher Tasting, organized by local wine and food catering group Lebonton to familiarize potential clients with the delights of Jewish wine and cuisine.

Forno Boccione has always been among my favorite Rome spots. But inside are hordes of guidebook-clutching tourists standing in line waiting to sample baked delights. The crowd is large enough to discourage me from getting anything. I think to myself how guidebooks can make or break a place. But good reviews cut both ways. Praise helps business but it also means everyone ends up in the same spots, which doesn’t help out a city’s variety.

“Gusto Kocher” is being held on Via Portico d’ Ottavia, inside the Palazzo della Cultura in the heart of the ghetto. Sixteenth-century Pope Paul IV issued a bull confining the city’s Jews — a few thousand at the time — to a group of city blocks near the banks of the Tiber, hardly a desirable spot since the river tended to flood (the present-day flood slopes went up later). The ghetto was officially abolished in 1882, when the Vatican lost control of Rome.

Alberto introduces me Daniele Terracina, a Lebonton’s partner who introduces us to Andrea Pandolfo. With his parents, Andrea runs the Cantina Sant’Andrea, a winery in Terracina just outside Rome. After tasting one of his tasty whites, “Tal,” a golden-hued and perfumed with a hint of fruit and vanilla, I ask him what led his family into the kosher wine business. Family passion, he replies. They’ve been winemakers since 1850.

At first, only a portion of the cellar was set aside for kosher products. The local rabbi and a small delegation would rent a nearby apartment during the wine harvest to ensure kosher norms were followed. But the sudden appearance of outsiders complicated the process, so the family changed its approach. Now, one branch of the winery is dedicated exclusively to the production of kosher wines, and the rabbi following the production process is present all year round.

We then meet Dario Bascetta Greco, another Lebonton partner. He asks us what we’re hungry for and my inclination is to say “anything and everything,” but despite three available samplings (the other two were Lebanese-style “mezze,” including falafel and hummus, and local street food), I decide to stay on theme with the Rome kosher menu.

Starters are focaccia stuffed with chicory sautéed in garlic, olive oil, chili flakes and bottarga (dried and salted mullet roe eggs) or with zucchini concia (concia is an ancient Rome Jewish preparation made from fried zucchini that’s marinated for a day in vinegar, garlic and basil).

Biting into a piece of concia focaccia, Alberto rightly points out that when it comes to kosher appetizers most Rome restaurants serve only deep-fried carciofi alla giudea, or Jewish-style artichokes. Concia recipes are few and far between.

Dario then hands me a paper bag containing fried cod. The yellow-gold wrap and the color of the fried and battered cod fillets seem to merge.

As I’m eating the cod, I’m handed a disposable container with pasta e ceci (pasta and chickpeas). While it’s tasty, I realize something’s missing: the anchovies. Pasta e ceci isn’t the real thing if it doesn’t have anchovies, my grandmother used to say. Dario explains that Jewish dietary restrictions forbid eating meat and fish at the same time. He’d left out the anchovies.

Soon I forget all about anchovies when I sample the celery and cinnamon flavored meatballs known as ngozzammoddi (azzamot means bone in Hebrew). Since the Sabbath meal often included chicken broth, the meatballs were usually conjured up from leftover scraps of flesh scraped straight off the bone. Eating the meatballs makes me feel like the food critic in the animated movie “Ratatouille.”

Most of the food I tasted combined tradition and innovation, delightfully fusing Jewish, Roman, Middle Eastern, and Eastern Europe culinary approaches. Aside from personal religious beliefs, eating kosher can be a plus for those interested in following a focused diet rich in sustainable foods (organic and vegetarian). It’s also a great option for those seeking ways around all kinds of food allergies.

— Cut the celery and the onion into strips and pan-fry them in extra virgin olive oil until blonde. Add the white wine. When it evaporates, add the tomato puree and salt to taste.

— Make the meatballs by mixing the veal and chicken with the soaked bread, egg, cinnamon and salt. Once you’ve blended the mixture, dip the completed meatballs into the sauce and mix. Cook over low heat, stirring the meatballs occasionally, for about 40 minutes.

As for wine, why not the white kosher Tal? If the shoe fits…