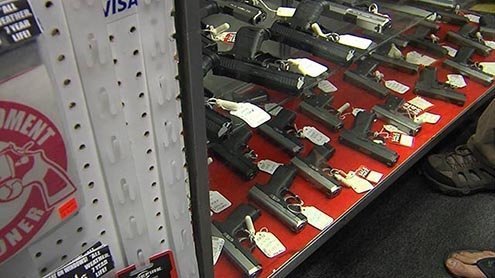 Condom sales may be stigmatized; gun sales are not.
I

t was a crisp, fall country Monday morning. From my classroom window I saw the last of the unpicked cotton bolls — now more like wet, thick strings — clinging to their desiccated stems. Autumn expresses withering and death. I was in my first year of teaching and we were in the tough, non-break that stretches between Labor Day to Thanksgiving. If the kids feel it, the teachers feel it more.

On this morning, one of my students arrived early, breaking the contemplative silence before the bell. He wore a camouflage jacket over his school uniform. They’re warm but have also become something of a seventh grade fashion statement. He was eager to show me a photograph. In the glossy rectangle, he wore the same jacket and was grinning ear-to-ear as he was now. Cold morning light like today’s illuminated his face. In the photo, he clutched the left horn of a dead buck and a powerful-looking rifle. The deer was splayed out on brown, muddy leaves, and it stared blankly at the camera.

“I shot my first buck this weekend, Mr. Carroll!” he told me elatedly.

Still lacking the cultural context to fully understand why this mattered and feeling a little sick, I smiled back with a shaky, “Oh yeah?”

“Yessir. Got this picture printed as soon as we got back.”

He then jogged down the hall to show the rest of his teachers.

It was deer hunting season, so over the next few weeks, almost every Monday morning, another student invariably came by to show me how they’d earned their rite of passage by spending the weekend in the woods, waiting for a kill. Male, female, black, and white, it was a ubiquitously momentous event for all my students. The community they grew up in made no difference. I later discovered the school’s fall break was precisely timed to coincide with first week of deer season. There’s a bigger picture here. Statistics suggest that by the time most rural, southern-state students head to college, 80 percent will have discharged a firearm.

In the months that followed my deer snapshot moment, I dined with various members of my Mississippi rural community in their homes. Invariably, a house tour included a wall with multi-colored, decorated Christian crosses as well as a tiered gun rack replete with handguns, semi-automatics, and shotguns. I began to understand how guns fit into a home, a tradition, and a life in the South.

In these parts, the Second Amendment means more than a right to bear arms: it can represent protection for the life you want to lead. As for historical context, the 19th-century Confederacy survived as long as it did in large part because a great many men of all ages knew how to shoot. Nearly 200 years after the Civil War, the weapons still exist to defend the South from the perceived menace of the federal government — including, as events have shown, the police. It’s a stubbornly held but deep belief.

As the gun control debate ripples through the country after Orlando and Dallas, I can’t help but wondering yet again why more conservative, Southern states cling to their arms so avidly. Despite the respect and care my students and their families proffer to their weapons, Mississippi has the second highest rate of gun-related deaths in the nation, about 18 deaths a year per 100,000 residents.

Gun ownership may be a part of family tradition but it also tears families apart, adding chaos to already awful situations. High gun ownership rates have been almost unanimously correlated with higher gun-related mortality rates. More than 50 percent of Mississippi residents own firearms (compared to about 23 percent in the New England area, say). Yet these statistics haven’t changed the pro-gun political stance Mississippians advocate.

When I first walked into the Wal-Mart in Greenville, Mississippi, I was more than surprised to find a specific over the counter checkout line with a booth containing condoms, pregnancy tests. Given the size of Mississippi towns, it’s likely that you knew the cashier: he or she might even be a relative. If that weren’t enough, sex (especially before marriage) carries a generous Bible Belt stigma. Contraception sales may be legal, but someone has their eyes on you.

In the same Wal-Mart, guns are sold like condoms: from behind a counter. Except that guns carry no social stigma. No need to watch look over your shoulders.

Guns are a symbol of pride, coming of age, and power. With these kinds of cultural dynamics and a generous helping of history, it’s no surprise that gun culture holds strong in the South. The larger and more deadly the weapon you own, the stronger your commitment to tradition, to sport, and to the values that go with them.

In “Giving Up the Gun,” a pop tune by Vampire Weekend, Ezra Koenig sings about quitting guns as a metaphor for self-improvement. Basing his lyrics on Japan’s 16th-century decision to revert to the sword and eliminate foreign trade, Koenig ruefully contemplates a return to simplicity and purer morality: “But if the chance remained / To see those better days / I’d cut the cannons down.”