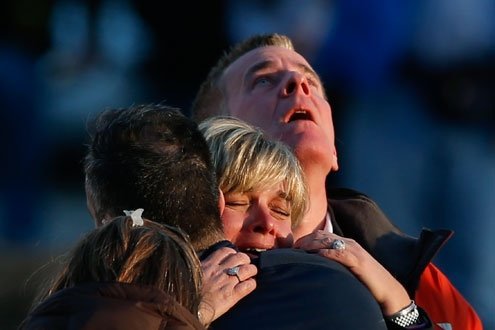 Grief-stricken parents of Newtown, Connecticut victims (26 dead): Since 2007, school massacres have killed more than 100.
I

f I had a dime for every time an Italian asked me, “Ma che fate qua?” I’d be bulletproof against the Italian economic crisis.

Translated precisely the phrase means: What are you doing here?

But the subtext reads quite differently: Why don’t you run screaming from Italy and go back to the U.S.?

I can’t say that I haven’t fantasized about packing up my family, calling a cab, heading to Leonardo Da Vinci Airport, and booking a one-way ticket out of this complicated and convoluted society. I have. More than once.

And I can’t say that I don’t enjoy spending two months every year in the U.S., visiting family and friends, or that I don’t feel homesick before our return flight to Italy. I do and I am.

But every time I made the decision to move back, at least mentally, something interfered. The something’s have place names.

Each time I was hell-bent on selling my property and setting up camp on the U.S. East Coast, gun massacres stopped me in my tracks. Coincidence?

Call me hippy. Call my dippy. I couldn’t ignore the “signs” the universe seemed to be hurling my way.

Random acts of violence are random, isolated — and quite possibly inevitable.

But American gun violence is no longer random, nor is it isolated. It is repetitive and widespread. If I wanted to be dramatic I’d call it an epidemic. And I will be dramatic. It’s an epidemic. Since 2007, more than 100 adults and students have been killed in school gun sprees throughout the country.

I grew up in the suburbs of Washington, D.C. at a time when the city was referred to as the “murder capital” of the world. In college, I knew better than to go to certain neighborhoods because stray bullets weren’t uncommon. As an added measure of good judgment I didn’t use crack cocaine (a major factor in the crime rate).

Keeping my kids in Italy makes me feel like I’m steering clear of those neighborhoods and avoiding the crack. Italy has its defects (too many to list), but I don’t worry that a lunatic will unload an automatic weapon in a Roman schoolyard. They won’t be gunned down here. And as an added bonus their diets won’t be poisoned by Monsanto’s genetically modified crap. But I digress.

“Why do Americans need so many guns?” is a question I hear from a lot of Italians. I scratch my head and try to explain something I don’t understand myself.

But I want to.

I recently spoke to a high-ranking veteran of the Washington, D.C. police force to try to find out. That city’s murder rate has dropped dramatically in recent decades. I was hoping he could tell me why. I thought perhaps the country could take a cue from their playbook.

“Demographics changed, technology changed, the whole landscape changed,” he told me, speaking off the record. Criminals had moved out of the city, he added. Large clusters of public housing, once hubs for crime, were dispersed in to smaller ones. Mobile phones had also made for quicker response time, which along with medical advances helped save lives.

But what about tactics and legislation, I asked? Surely they’d also played a role.

Then he said something that astonished me.

“Police departments and legislation can’t prevent gun violence or homicides,” he told me bluntly. “Only society can solve the problem through educational systems, churches and good parenting.”

The comment left me dumbfounded because I’d always believed that additional gun control legislation and mental health reform could produce the curbs we so desperately needed.

Not for this officer. He put schooling, and more importantly, parenting, atop the list of what was necessary to implement the transformation.

“What are you writing this for?” he asked me.

“Ironically, for a parenting column,” I replied.

I admit I still don’t fully understand gun violence or how to bring it under control. But I do hold out more hope that parents can play a role in solution.