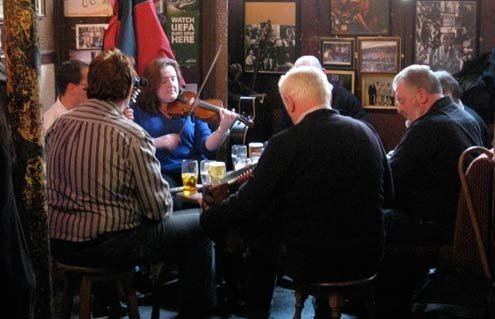 A rotating roster of musicians played an intoxicating mix of folk songs and ballads... Photos by Ingrid Williams.
W

hatever Dublin once was, it is no more. Or at least not on weekend nights along the cobblestone lanes of Temple Bar. Come nightfall, the charming, bohemian streets lined with boutiques, pubs, and cafés morph into a stag-and-hen-party mecca, complete with strobe lights, burly bouncers and cover charges. Every slick hotel lounge and rustic pub is transformed into a virtual mosh pit, with drunk women dancing to 1980s hits while even drunker men pound shots in rapid succession.

This wasn’t what I was expecting when my husband, Dave, and I arrived in Dublin for a weekend visit in early February. In my mind, I had visions of grandfatherly pubs with worn barstools and clever, chatty barkeep; tiny bookshops filled with well-worn editions of Joyce and Yeats; potatoes and Guinness, shamrocks and leprechauns. Okay, maybe not the shamrocks and leprechauns, but still.

Earlier in the day, Dublin had been showing signs of its gloomier past. Freezing winds whipped through the slush-covered streets (remnants of a rare snowstorm), where bundled-up beggars crouched against telephone booths in futile attempts to stay warm. Even the flowers in St. Stephen’s Green were frozen solid. Eventually, sheets of rain began to pour down from the gray clouds that had been hovering ominously over the city all morning. To escape the sodden dreariness, Dave and I ducked into the nearest pub, which happened to be a cozy place called O’Donoghue’s. With peeling paint and a rickety wooden door, the pub had seemed unremarkable from the street; inside, it turned out to be a congenial gathering spot popular with casual musicians.

Tucked into a nook at the front of the pub, a guitar-strumming, ruddy-cheeked Irishman led a ragtag band in a relaxed session of impossibly pleasant Irish folk music. The faded black-and-white photos on the wall depicted the very same scene through the years, and suggested that this wasn’t just a show put on for the benefit of tourists. By the looks of it, we were the only tourists anyway.

Dave ordered two pints of Guinness, despite knowing that I vehemently dislike stouts. He claimed that drinking cider — or worse, Carlsberg — would not be tolerated in a Dublin pub. Though the first pint was slow going, I have to admit that the second one went down quite easily. I reasoned that Guinness was an acquired taste … one that had taken me exactly one pint to acquire.

In the meantime, a rotating roster of musicians played an intoxicating mix of foot-stomping folk songs and melancholy ballads. By the time we rolled ourselves out of the pub in search of food, two hours had passed. To our surprise and delight, the rain had stopped and the sky had become a clear blue.

In the shadow of the Christ Church Cathedral, we found Leo Burdock’s fish and chips take-away stand. With eyes far hungrier than our bellies, we each bought a giant bag of salted cod and thick chips coated with more salt and vinegar. Then, on wooden benches in the cathedral’s quiet, sunken courtyard, we feasted with the warm sun on our faces and steaming food on our laps.

After cleaning up our greasy fingers and throwing out a regretfully large portion of chips, it was time to walk off our gluttonous afternoon snack. We wandered along the quiet paths of Trinity College, where cricket fields of neon green grass nestled between the college’s gray stone buildings. On a quest to find the old residences of Oscar Wilde and W.B. Yeats, we then made our way south to Merrion Square.

A perimeter of handsome Georgian houses with brightly painted doors framed the square, where dozens of tourists were piling off tour busses, cameras in hand. But in the center of the square, a charmingly overgrown park was hiding in plain sight. Pushing open a heavy iron gate, we ducked into what felt like a secret garden.

A magical hush pervaded the narrow paths that led past thick bushes and beneath trees draped in ivy. Small patches of open lawn were hidden from the street behind the lush vegetation, and it was there that we happened to spot the French rugby team warming up for its match that evening against Ireland.

While wandering the city that day, we had found it peculiar that so many of the people we passed had been speaking French. Now we understood why. Perhaps the matching berets and scarves or the large French flags flying outside some pubs beside signs reading “Bienvenue le Français!” should have tipped us off. But as Americans ignorant to the fanaticism of this particular sport — or perhaps just too inebriated to notice — we would soon be schooled in the fervor surrounding Six Nations matches.

When most of the Frenchmen and a good deal of Dubliners had left for the match, we hit up one of the city’s only microbreweries, a multi-level behemoth of a bar called the Porterhouse. Considering that this was the first rugby match I’d ever watched, I found it surprisingly easy to follow. Rugby is just American football without the rules, helmets, and heavy padding. Over an Irish Oyster Stout and a Belgian Duvel (can you guess who drank which?), we cheered Ireland on to a tight victory over France. Then, when everyone else began to celebrate, we snuck out of the bar to get some dinner.

Considering the name of the place — Gruel — I wasn’t expecting such a memorably delicious meal (Gruel, 68a Dame Street; tel. (1) 6707119. Open daily). With a take-away counter up front and a tiny space filled with mismatched tables and chairs in the back, the cramped but eminently cozy restaurant had an entirely unpretentious atmosphere. Seated beside a bubblegum pink fireplace, we ordered from the supper menu scrawled in chalk on the blackboard hanging on the wall. This was a place to eat, not a place to dine, and eat we did.

The bangers and mash were elevated from mere pub food, thanks to buttery whipped potatoes and a warm slaw of spiced red cabbage. Grilled lamb patties with herbed couscous were topped with a fiery harissa-mint yogurt. With balanced, fresh flavors, these were delightfully modern versions of traditional, hearty comfort food. On a bitterly cold, blustery night, Gruel was a culinary beacon of light.

When we stepped back outside into the cold after dinner, the streets were bustling with post-rugby celebrations. We headed toward Temple Bar with the intention of having one last drink before turning in for the night, but soon discovered the area transformed. Pubs that had been sparsely populated just an hour before now had burly bouncers lurking behind velvet ropes outside the doors.

Groups of American study-abroad coeds in miniskirts and heels shivered outside every entrance, puffing on cigarettes, while older Frenchmen stopped to stare at their bare legs. With as much charm as a college frat party, we instead walked back to our hotel as Journey played to piercing squeals in the distance.

By the next morning, peace had returned to the streets. All was quiet (and likely hung over) as we settled in for an Irish breakfast. Passing on black pudding, we instead filled up on platefuls of fried eggs, toast, thick bacon, grilled tomatoes, sausages, potato cakes, and boxty pancakes. Although the boxty pancakes were supposedly an Irish specialty made from potatoes, they tasted like light, whole-wheat crepes. But the potato cakes — mashed and then fried in small patties — tasted as potatoes should: creamy and crispy and delicious.

As we finished breakfast, some vendors were setting up a market across the street. Table after table began to fill with used books, with everything from Danielle Steel novels to Irish poetry collections. Loyal to local literary legends like Joyce and Beckett, worn copies of “Ulysses” and “Waiting for Godot” were heavily sprinkled into the mix.

Our flight back to Italy was departing in just a few hours, so we walked along the Liffey River, taking some final pictures. Gliding along the surface of the murky water, two crew teams rowed silently beneath the white iron Ha’penny Bridge. Though many of the old buildings lining the river have now been turned into Italian restaurants and boutique hotels, a few tattered bookshops and musty pubs still remain. Having never been in Dublin before the economic boom of the 1990s, I can’t say how much of the once poverty-stricken city is unchanged. But in certain corners, at certain times, an undeniable gritty charm still remains.

The Dublin airport is located 10 kilometers outside of the city. From the airport, Aircoach busses run about every 15 minutes to various points within Dublin City Centre, and the trip takes about 30 minutes. Tickets cost €7 one-way or €12 round-trip and can be bought on board or from the attendant at a booth located just outside the airport arrivals hall exit.