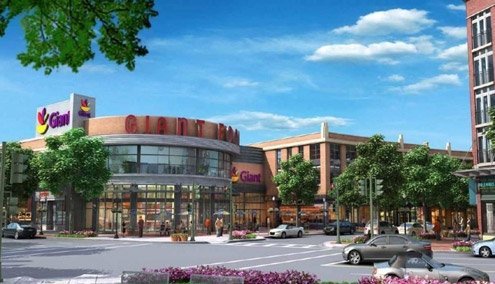 Cathedral Commons: The familiar shape of things to come.
W

here I once ate beef-burgers with my father is now a great crater of spooned-out earth lorded over by a crane that local builders nonchalantly label a “mass excavation.”

In 1960s, in what is now the excavation, soda counter attendants, most of them apron-clad black women from the American Deep South, served vanilla milk shakes and burgers to a father who looked like a grandfather and a son who resembled a matchstick figure. The place was a chain store called People’s Drug Store and beside it was a food market, Giant Food, two bustling American stores with names that typically focused on citizenry and bigness.

Saturday my father and I would troupe to People’s always ordering the same 50-cent burger and 25-cent shake, after which I’d race to nearby Sullivan’s Toy Store, whose storefront brimmed with the tiny racecars I coveted. Please, I’d whine at my father. Not today, he’d answer. Beside Sullivan’s was Interstate Savings and Loan, where I opened my first account ($5), and beside the bank was Burka’s liquor store, where my father would pick up wines whose adult redness I scoffed at. I copied that redness by snacking on dry cherry Jell-O powder.

This was in a city, Washington, D.C., that still flourishes, and where my childhood home, bought in 1959 (for $21,500), remains intact and cared for five owners after my family moved out.

Some neighborhoods are oblivious to time, though admittedly Rome is better at the static than the United States, where the new still means the good, at least commercially, and a youth influx is making the inner core of once-troubled Washington fashionable again. Construction is on an upswing, a good thing in terms of the American troika: spending, expansion, and mobility, all of which are imbued with national hopefulness.

But the new also consumes what came before, with jackhammers and their wielders mostly uninterested in the snows of yesteryear. Ohio-born London expat Chrissie Hynde, the lead singer of the 1980s band The Pretenders, was once so unnerved about going home that she snarled out a song. “I went back to Ohio but my city was gone/There was no train station/there was no downtown/South Howard had disappeared/all my favorite places/My city had been pulled down — reduced to parking spaces…” Country girl Joni Mitchell had also protested parking lots a decade before, but it was Bob Dylan who was wiser than both of them when he suggested that times were ‘achangin, not just then but always.

Where the People’s, the toy store and the Giant once stood will soon yield “Cathedral Commons,” a hybrid complex of homes and stores that will eventually cover some 10 city blocks. Placards boast spacious and pristine apartments with secure entrances and boutique-like shops whose painted personnel emit “have a nice day” smiles with devoted incessancy.

America eventually escapes any and all recessions through bigness (whether it’s weaponry or malls). It’s big despite itself, or for the sake of itself, a country on autopilot replication because “new and good” nationhood uses refurbishing as a spiritual force to nourishes both optimism and righteousness. This still makes for a paradox of sorts: a provincial country that won’t stand pat and feels compelled to constantly make the new even newer no matter what.

But new things replace old in a way quite different than ancient Rome. New America is built to ensure the old actually vanishes, so that a demolished mall exists only in the minds of those who remember a first kiss in a long-gone movie theater.

Forget archeology: American layers are unencumbered by historical resonance, something of a historical anomaly since — minus war — the eradication of buildings was once deplorable. Slivers of the past, like tombstones, possessed their own affect.

No such subtlety in my old stomping ground, which has instead been stomped on, yielding the kind of hole I surely would have marveled at as a boy, since I was fascinated with all that which was made to suddenly go away. The act of blowing up was a frontier itch well worth scratching, a morbidity that made the effects of 9/11 all the more insidious (and which still suggests “righteous” bombing — consider the deepening Syria conundrum — as a surefire precursor to something better).

But half-a-century after burgers and shakes I’ve lost my appetite for America’s plethora of ongoing abysses. I’m more inclined to remember Mr. Sullivan, who knew the first names of all the wide-eyed neighborhood boys who pawed his goodies. Then as now detonation is billed as an example of the common good at work. Holes presage the better to come, except among those who’d prefer to remember what existed before, and make it a point to write down what they remember before snows of yesteryear melt for keeps.