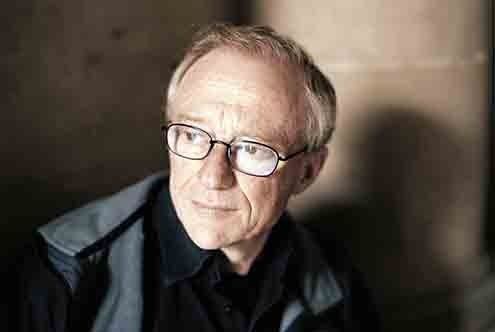 From prolific Israeli author David Grossman, a novel about loss, guilt and identity.
&

#8220;A Horse Walks into a Bar” (Jonathan Cape, 2016) is acclaimed Israeli writer David Grossman’s latest novel, and one of his finest, limned by tragedy but poignantly hopeful. It features retired judge Avishai Lazari as witness-narrator who witnesses a stand-up comic act in which classic bar jokes alternate with raw, self-confession.

Four decades after he last saw — or even heard of — childhood friend Dovaleh Greenstein, Lazari is surprised by the man’s sudden phone invitation: “Come to my next club act.” Over the years, Dov has followed newspaper reports of the judge’s carefully worded verdicts. “Watch me. See who I really am,” he pleads, “then tell me.”

Suddenly, Lazar remembers back to two weeks they spent together as 14-year-olds during their mandatory military training at the Gadna Camp. “I simply froze in terror at my ability to forget.”

For Dov, remembering generates memories of persecution, guilt and another kind of terror, all of which his act will reveal. A skinny, short, bespectacled figure in ripped jeans, he starts by jollying his audience with laughs. “Good evening to the majestic city of Caesariyaaaaah.”

“Wait a minute,” he yells: “This isn’t Caesarea? It’s Netanya? … And I’m not wearing a flak jacket!” His face a mask of fear, he protects his crotch with his hands. The crowd guffaws. Fictional Netanya is the perfect city for darkly ambiguous Arab jokes. Its waterfront tourist and business attractions provide wide representation of an Israeli population beset by constant warfare. Tonight’s group contains tourists, husky soldiers, local married couples, bikers, young law students, “even a whiff of the 1%.” They’re from all over the country.

Lazar watches these spectators as the rubber-faced comic loonily grins, then sticks in the knife: “You’ve even come from the settlements? Then who’s left to beat up the Arabs?” Shocked silence. He calculates, then reclaims their affection: “Just kidding!”

“For listen, my darlings. Imagine a dream world, where you have a free ticket to do anything you like with the Arabs… No more self-hating Jews.” Now the crowd yells and cheers with Dov.

Until he pivots round on his heel, to present a bitter, twisted face that instantly gears the situation into reverse: “Knock off any Arabs today?” Boos; some soldiers bang their tables. A few people quietly leave. For the moment he surrenders. “You’re right; no politics tonight,” he promises.

The little man’s lying, of course. Claims he’s going to reward them with one-timer-only: his own life story. It’s a “reward” guaranteed to simultaneously hypnotize and repel its witnesses. For Dov’s private tale painfully mirrors the Jewish state itself: trapped in an unsustainable mix of self-hatred, guilt, and a fierce, necessary drive for survival, even vengeance.

Dov’s recall-act starts within the Gadna camp, and a summons to the commander’s office, where soldiers talked about “the orphan.” He was that orphan. He was told a military driver would get him to the funeral. But at 14, he was too much in shock to ask whose funeral, his mother’s or his father’s?

His act suddenly turns into a cascade of memories from that drive. He starts slapping himself, hard. Jokes turn into acts of blackmail, aimed at keeping at least a few spectators. Most slowly stand and walk out.

He’s begun with grievous, yet affectionate account of his mother Sarah, a post-World War II Polish immigrant to Israel. Arrived after six months in a freight car, being gang raped by Nazis. After that, this beautiful woman lost her ability to think, or even talk. By trick of fate, she married Hezhel Greenstein, an early, pre-war Zionist immigrant to Israel. A barber in a small town, he fearfully protects Sarah and their child. He cooks, cleans, organizes, and frenziedly organizes again.

To prepare undersized Dov for a world (even a Jewish-Israeli world) that manifests its fears by slapping the weak, Hezhel doses out sound whippings: “a beating is better than a thousand words.” That doesn’t keep bullies at bay. Dov starts to walk on his hands — hard to slap a boy with his head to the ground.

Still, Dov finds a single bonding friendship with Lazar, who only half-noticed Dov walk alone to the military car, and never thought of him again.

But Dov never forgot the teenaged time when he made a “horrific, stupid accounting,” wishing for the survival of one parent only. That child’s choice brought 40 years of self-hatred. Now, with Lazar present, he awaits a clear-eyed view of who he he’s been in the interim, perhaps even a verdict.

Once more in his astounding career, Grossman skillfully blends popular tales and jokes with strict veracity to universalize a core theme in Jewish history: the excruciating weight of ethical choice for any society, and in any life.