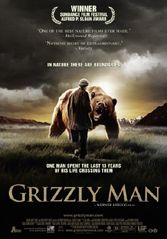 German director Werner Herzog’s documentary brilliantly shows the terrifying, beautiful world of grizzly bears and one man’s odyssey with them. With fur so oily that it shimmers gold in the sunlight, the grizzly is magnificent to behold. It’s easy to see how Timothy Treadwell, a marginally employed actor in California, was seduced to spend his summers in Alaska filming, studying, and living with the creatures.

But nature is terrifying and ruthless. Step over the line and there’s no guarantee that one will remain at the top of the food chain. Tim’s obsession with the bears and his increasing alienation with his own human society (including park rangers) shows the dark side of our own natures.

Oddly, his partner Amie Huguenard remains a mystery to us yet is a perpetual off-screen presence. Unable to straddle both worlds, Tim is doomed to failure. But not total: Tim’s film footage of bears even Herzog says couldn’t have matched — for starters no union would have permitted such danger. Surgically precise editing. Human flaws are bared but with compassion. The director comprehends obsession — which ended in Tim and Amie’s mauling death by the bears they revered. Riveting. Don’t miss it.