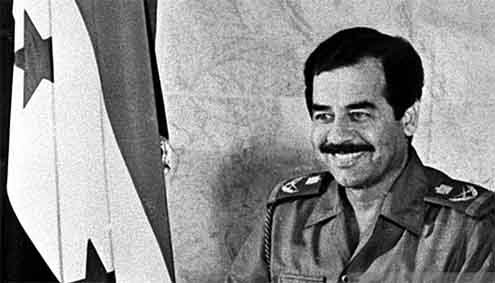 n their waning days, two tyrants spun Louis XV-style foreboding mocked by enlightened mass media at the time as both self-serving and pathetic. Iraq’s invasion-imperiled Saddam Hussein warned his country, if occupied, would become a cradle for extremism and regional instability. He fled Bagdad only to be found cowering in a ditch and hung. His prewar “après moi, le déluge” utterances seemed in keeping with a delusional autocrat. Mission accomplished were the words that mattered, at least for a while.

Less than a decade later, another regional dictator, Libya’s Moammar Gadafi, foretold a cursed future. If he went — and he did, in 2011, complicit NATO bombardments — Libya would lapse into chaos, torn apart by competing factions, becoming an outlaw state with porous borders. The West that made him in 1969 (he rose to power in a CIA-backed coup) would, he said, eventually come to regret having helped to oust him. The extremism he quashed for decades and the sub-Saharan emigration northward he mostly thwarted would morph into a weed growing north and west.

It is the latest white man’s pleasure to speak proudly of displaced tyrants. Saddam and Gadafi are still marketed across generations as pathologically wicked men removed by morally well-intentioned democracies whose patience with assassins has limits. That neat storyline, whether told by Western conservatives or liberals, is unlikely to change (though in fairness Donald Trump — a liker of powerful men — never bought into it). Lesser of evils thinking still portrays Iraq and Libya as intangibly “better” places for their cleansing, or imagines them as such in the long run. Except of course that the long doesn’t apply now.

Saddam’s ouster generated just what he foresaw, and far worse. His disbanded army and its Sunni elite felt shoved aside by the ascent of the Shia minority in both the government and U.S.-rebuilt military. Gangs begot liberation groups that were soon transformed into Sunni radical factions — a Black Shirt-style hodgepodge of criminals, former soldiers and mercenaries. The anti-occupation militants were aided and abetted by Saudi Arabia, always thrilled to help out radical advances so long as they stay away from the holy homeland. Youthful occupation haters with nowhere to go joined the nearest militia, ironically radicalized by the invasion itself. No longer checked by Saddam’s ruthless security forces, the emboldened groups grew in size and ambition. Percolating strife between Sunni and Shia — cash flow and Koran adding to the incendiary mix — became dependent on anti-Western rhetoric and was sharpened by the rough but orderly rigor of Sharia law. The furious whole was let loose to roam westward, with unstable Syria becoming the favored caliphate-building destination. Soon, both nations collapsed into permanent civil war funded by regional players, its foot-soldiers eager to export the fruits of their mayhem to European cities via random acts of terrorism then celebrated on social media. The post-Saddam circle was thus squared.

The U.S., which hot-tempered Saddam never really truly hated (preferring to loathe theocratic Iran instead), received indirect blame for the muck that followed him when he was in fact a long-time guarantor of secularism through force — Tito with a blowtorch. As he predicted, his removal popped the cork, so much so that Syria’s own demi-tyrant, Bashar al-Assad, has since been granted a second wind lest Syria collapse entirely.

It’s worse in Libya, a non-state state run by a host of criminal factions eager to acquire cash from foreign sources to abet terrorism while continuing to lubricate the vast and lucrative “exportation” machinery that assists souls eager to make it to Italy or Greece after having migrated northward to the sea Gadafi’s puppet army, corrupt but loyal, is no longer around to stanch national excesses through imprisonment and execution. Blood feuds lap over into religious conflict with hardcore Islamist groups playing the same punitive, vendetta-driven role as Gadafi’s secret police, though more randomly — just as ISIS has one-upped even Saddam in its gleeful inhumanity.

Two Pandora’s Boxes are now open wide and spilling their guts daily. Overwhelmed since Gadafi’s ouster, Italy can’t handle more African immigrants, and has warned the European Union about the “unsustainable” flux; Northern and Eastern Europe in turn seek to stem the flood of exiles from the Syrian corridor. Yet “free”” Iraq (non-free Syria with it) and “free” Libya continue turning up the heat. Neither the EU nor the United States has a clue how to bring these roiling chunks of human geography to heel. The tyrants who did, Saddam and Gadafi, now hold hands in Hell, if such a place exists. Presuming it does, they may be seen grinning between the flames, thanking woefully misplaced notions of “change for the better” for their Satanic rehabilitation.