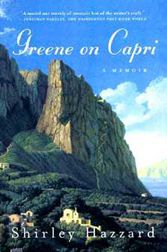 azzard’s chiseled portrait of novelist Graham Greene’s Capri years (he visited his Anacapri villa, Il Rosaio, in the 1950s, 60s and 70s) gratifies and maddens. Capri’s post-agrarian transformation is made gorgeous in her hands — “vaunted attestable gains and silent, inestimable losses.” She struggles instead with the mercurial Greene because, as she readily admits, “the island had not ‘grown’ on him.” Too often, she lapses into literary one-upmanship.

Sensitive to Greene’s women-bashing (he demeaned female intellect), she pays him back in erudition. But it’s a cheerless contest. At one point she notes: “There was little inclination, on Graham’s part, toward expatriation or metamorphosis.” Later: “Capri … was never an immediate source for his fiction and is hardly touched on in his memoirs.” And finally: “He learned no Italian.” What emerges, then, is a bittersweet recollection of a frugal and “chimerical” man on a mythic island who embodied a time before “attestable gains.” It is Hazzard, not Greene, who is vividly on Capri, relating its “inward legend.” NB: A late and brief portrait of the historian Sir Harold Acton is as vivid as the whole of Greene.